FG told to release, negotiate with Nnamdi Kanu like Nelson… 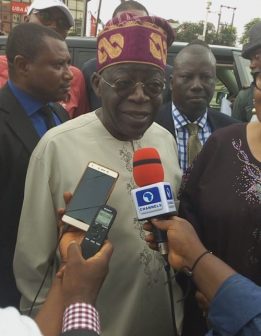 SAHARANEWS – The National Leader of the All Progressives Congress (APC), Bola Tinubu, appealed to Nigerians to remain peaceful following the postponement of the general elections.

He made the plea in a statement on Saturday, hours after the Independent National Electoral Commission (INEC) shifted the polls by one week.

“Please, persevere just a bit longer to ensure that the elections on February 23 truly reflect the will of the people” the APC leader begged.

He added, “Do not allow this delay to deter you from the expression of your democratic rights. What you had set your mind to do on February 16, keep your mind and heart on for February 23.”

ALSO READ:  State Autonomy Is The Way Forward For A More Prosperous And United Nigeria - Osinbajo

Tinubu who said the postponement was painful asked all those who came out to vote and those who intended to do so to maintain their commitment.

He noted the challenges encountered by INEC but raised concern that the commission was unable to address the issues within the time allotted.

“We are also perplexed that INEC literally waited so late in the day to make known the obstacles preventing it from keeping faith to the election schedule,” the former Lagos State governor regretted.

He said, “INEC could have and should have given the nation more ample and earlier warning.

“This could have perhaps lessened the pervasive disappointment that we all now feel. It also would have helped people better order their steps”.

Tinubu’s quotes read, “We have reports of eager voters rising early to leave their homes to cast their ballots only to be told upon arriving at their appointed polling stations that the election had been postponed.

“This should not have happened for it could well discourage people from coming out when the election takes place. Thus, we heartily commend those people for coming out in exercise of their fundamental rights and duties as citizen voters, who vote by vote, seek to build and perfect our democracy.

“For each voter is in part an architect and each one of your votes is a brick by which, when lain together, shall construct a strong democracy in such a way that it shall forever stand and endure. Thus, we appeal to all who actually came out to vote and to those who intended to vote today, to maintain your commitment.

“Do not allow this delay to deter you from the expression of your democratic rights. What you had set your mind to do on February 16, keep your mind and heart on for February 23.

2019 ELECTION: The Impact Of IPOB’s Election Boycott Suspension And Why Biafrans Should Rejoice