BREAKING: Another Shocker For Okorocha As INEC Removes His… 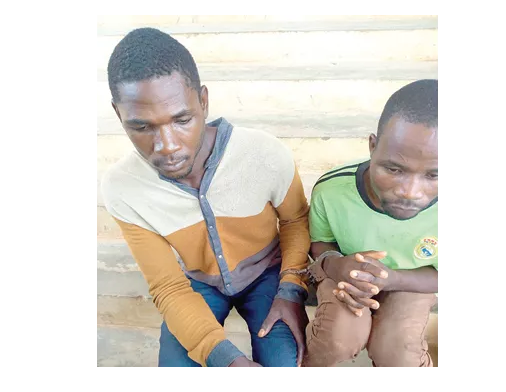 SAHARANEWS – Security guards has landed in serious mess for lossing self control which leads him to rape a prophetess after threatening her with weapon.

SaharaNews gathered tha the suspected rapist, Longbab Bouguen (39), has told the police in Ondo State that he dragged a prophetess coming from the church into the bush and attempted to rape her.

Bouguen, a security guard, said when he saw the prophetess in white rope, the urge to have sex came over him and held her, dragged her into the bush and put his manhood into her.

However, he said he could not penetrate the prophetess because of her resistance, forcing him to ejaculate on her body.

Speaking at the police headquarters during his parade and one other suspect by the Ondo State Police Command, Bouguen blamed the crime on the devil.

He said he could not explain what came over him before assaulting the woman.

Although he did not penetrate the woman, he admitted that he ejaculated before releasing the woman to go after collecting N700 from her.
Bouguen said the other suspect did not participate in the rape.

“When he came to me begging for money for food, I gave him N200 out of the money collected from the woman because he was hungry. He knew nothing about the incident.”

Parading Bouguen and Daniel John for the rape of a prophetess, the state Police Public Relations Officer (PPRO), Mr. Femi Joseph, said the incident occurred around Agbogbo area of Akure, the state capital.

Joseph explained that the victim, who was returning home about 8.30p.m., was dragged into the bush in the area by the security guard where he had carnal knowledge of the prophetess.

According to him, the suspect forcibly removed and tore the victim’s pants and had sexual intercourse with her before collecting money from the victim.

He said: “One prophetess of Celestial Church of Christ (name withheld) of Agbogbo area, Akure-Owo Road, reported that one security guard, Longbab Bouguen, suddenly dragged her to secluded area and forcibly tore her pants to have sexual intercourse with her through the anus.

“The suspect threatened the victim by brandishing a machete and knife in his hands while putting on a dark eyeglass and also dispossessed the victim of N700 which he consequently shared with his co-security guard, Daniel John.”

Joseph, however, said the police would soon charge the two suspects to court after completing its investigatio