UPDATE: 3 Policemen Murdered By Soldiers; The Captain Who Ordered The Killings Arrested 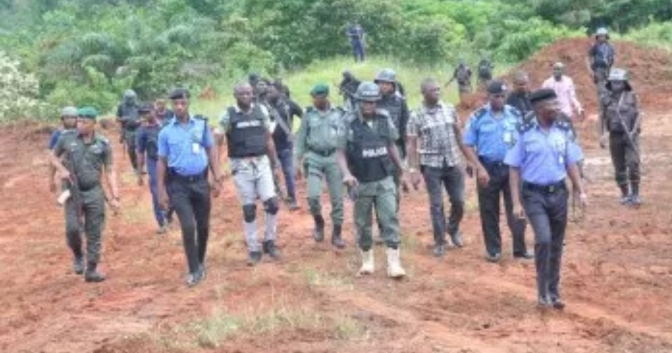 The captain was arrested by the Army on Sunday, August 11, night after he was invited by the panel set up to investigate the incident for questioning

SAHARANEWS – The Nigerian Army officer who gave the order for the killing of three Police officers and a civilian who were transporting a kidnap kingpin, Hamisu Bala Wadume, have been arrested.

Vanguard reports that the officer, a captain, was arrested by the Army on Sunday, August 11, night after he was invited by the panel set up to investigate the incident for questioning.

A source within the Army said the kidnap suspect who was freed by some soldiers – along Ibi-Wukari road – who were allegedly compromised.

It was also gathered that the captain ordered the soldiers to shot at the bus conveying Wadume with an instruction that no police officer in the vehicle escapes while the kidnap suspect is freed.

“Our colleagues (police operatives) also exchanged pleasantries with the army personnel at the checkpoint before they pursued then on the captain’s instruction and fired at them,” the source said.

According to the source, the road to Ibi village is a narrow and only road that leads to the area.

“That was why when the policemen encountered the soldiers at the three checkpoints, they introduced themselves and stated what they came for. They chatted, joked and exchanged pleasantries,” the source said.

The source added that the arrest of the suspect was made by the Police within 20 minutes and while they were returning soldiers at the first and second check points inquired from them if they were already through.

The source said the soldiers and operatives know each another, but the phone call from a top military personnel changed the whole scenario.

However, another military source said the team of the inspector general of Police Intelligence Response Team (IRT) were attacked at the second military check-point in the village causing the driver of the vehicle to loose control under the series of gun fire.

The source explained that some of the officers who managed to crawl out of the vehicle into the bush path were immediately shot dead by the soldiers at close range after they realised they were still alive.

It was gathered that residents who crowded scene of the incident went wild with jubilation, after been informed that the slain police officers were kidnappers.

However, the teaming crowd Saved the lives of two other officers who survived the gunfire by the soldiers.

The source said, it was gathered one of the soldiers reportedly told his colleagues that killing the surviving officers would be too risky as the villagers already captured them alive on their smart phones.

“When the operatives got to Ibi town, they booked their arrival at the police station and proceeded with assistance from a policeman attached to them in the state headquarters, Jalingo, to trace and arrest Alhaji Hamisu Wadume, who is wanted because he is linked to several kidnappings in Taraba state, including a recent kidnapping in which N100 million was collected as ransom,” the source noted.

It was gathered that information went out to the captain after the Police officers left Jalingo that his friend Wadume had been kidnapped.

“Without any verification or inquiries, the Army captain ordered his men along the highway to ambush the policemen. Thus, as the team was moving along Ibi-Jalingo road, they came under the hail of bullets from soldiers, which led to the vehicle conveying the policemen somersaulting.”

“Thereafter, two policemen and one civilian agent were shot dead by the soldiers at close range. The policemen were shot despite presenting their police identification cards, and also adorning police jackets,” the source said.

According to him, all the IRT Police team were alive when the vehicle somersaulted.

He said that two operatives, Inspector Mark Idiale and Inspector Abah Mathias, had serious bullet wounds and are currently receiving treatment at the General Hospital Wukari in Taraba state.

“It is believed that Wadume and other members of his gang escaped with him to a location outside Ibi Town.”

Tsav urged the Army and the Police to end the attack on each other on the media while waiting for reports of the the presidential committee of inquiry on the matter.

#RevolutionNow: The 70yrs Old Woman Narrates Her Ordeals In The Hands Of Nigerian Police During Protest