Residents on the edge as heavily armed troops patrol ahead… 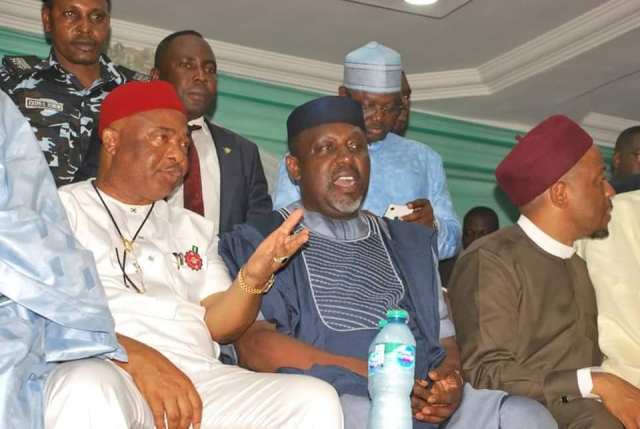 Supporters of Imo State Governor, Hope Uzodinma, and his predecessor, Rochas Okorocha, have clashed over an alleged plan to recall Okorocha as the Senator representing Imo West District at the National Assembly.

According to Punch, while a group of Uzodinma’s supporters called the Orlu Political Consecutive Assembly insisted to continue with plans to recall Okorocha from the Senate, the Association of Orlu Women for Good Governance urged Uzodinma not to spend state resources to recall the Senator.

AOWGG, at a press conference, asked Uzodinma and Okorocha – who they described as their sons – to stop “disgracing the people of Orlu zone.”

She said, “The government of Chief Hope Uzodinma should face governance and provide the dividends of democracy for Imo people and leave Okorocha alone.

“The state government should take back the N1bn reported to have been given to OPOCA (Orlu Political Consecutive Assembly) for the so-called recall of Okorocha and use the money for other meaningful things in the state.”

However, OPOCA has insisted on its plans to recall Okorocha, saying the senator “has crossed the red line and has touched the tail of a sleeping tiger.”

The group’s spokesperson, Modestus Nwamkpa, who is also the Senior Special Assistant to the Governor on Print Media, said Okorocha had not represented the district well at the Senate.

Nwamkpa said it was wrong for Okorocha to have launched a “campaign of calumny” against the governor, who is also from Orlu zone, which Okorocha represents at the Senate.

Nwamkpa said, “Now, the question is: why does OPOCA want to recall Okorocha? It is said that he who obstructs the beehive’s peace should endure the pains of the bees’ stings.’

Okorocha has crossed the red line. He has touched the tail of a sleeping tiger and the resultant effect is what he is currently facing – recall.”

Nwamkpa said OPOCA had been at the forefront of defending the interest of the Orlu zone, saying “any Orlu man holding the position of Imo governorship must be protected at all costs. Orlu’s interest must come first.”

Okorocha had on February 21 alleged that Uzodinma attacked him with thugs.

The state police command also arrested the former governor and three of his political associates after government and security officials stormed the Royal Spring Palm Estate, Owerri, and unsealed it.

The estate was linked to Okorocha’s wife, Nkechi.

The state government said its action was in accordance with a report of a judicial panel set up by a former governor, Emeka Ihedioha, before he left office.

At a press conference in Owerri, the state capital, on Wednesday, the Chairman of the Board of Trustees, IWYGG, Prince Wisdom Nwauwa, asked the governor to hand over the two aides to the police for prosecution.

Nwauwa said that the attack on Okorocha, a serving senator, “was another sad commentary on our democracy.”