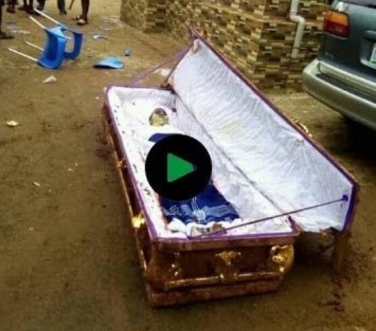 SAHARANEWS – An angry family reportedly exhumed buried woman and her daughter-in-law three weeks later after funeral over a land dispute.

In trending video footage on social media, the yet to be identified families in Njaba Local government area Imo State said to had been in a land dispute for a very long time which delayed the burials of both deceased.

According to a Facebook client, who is also an eyewitness, said the both deceased are poor and have no piece of land left for them and have been in the morgue for six (6) years but were later laid to rest this year.

The angry family, after burial, exhumed the bodies which prompted anger of the community youths requested the corpses be buried back.

The eyewitness account reads: “A family had to dig out the Corps of a mother and her daughter in-Law who has been in buried 3weeks ago just because of land disputes.

“Before three weeks ago they have been in d mortuary for 6years. This very family are very poor with no shelter. Out of anger, the entire youths carried their corps into the sitting room of the same family that dig it out.

“This happened in Njaba L. G. A, Imo State. I witnessed it today with my two eyes.”