JUBRIL:This is not hate speech, the presidency owe Nigerians…

(VIDEO) BREAKING: Middle Belt Collectively Rejects Northern Nigeria, Pulls Out Of ACF, Says They Can No Longer Be Used As Instruments In The Hands Of The Arewas 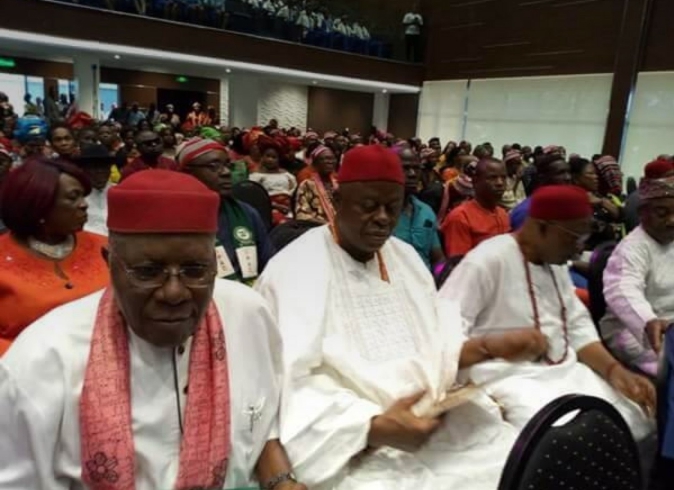 SAHARANEWS – National President of the Middle-Belt Forum, Dr Pogu Bitrus, has revealed the reason behind the move by the Middle-Belt to quit the hegemonic Northern arrangement led by the Arewa Consultative Forum, ACF, and work with the Southern sociopolitical groups.

According to him, the core north, since Nigeria’s independence, has been using the Middle Belt to make up the number so as to continue dominating leadership spheres.

He added that his people have had enough of that; warning southerners to beware of RUGA, cattle-colony policies.

Bitrus, who stressed that a certain fulanisation agenda is real, warned that Fulani from the whole West Africa could come and settle in Nigeria under the guise of RUGA.

He told Vanguard: “Before independence, there was the Williams Commission that was created by the colonial masters to look at the problem of the nationalities in the north other than the big Hausa/Fulani group who they saw with an organised system when they came in.

ALSO READ:  NIA in a secret memo ask Buhari to stop signing documents out of ignorance

“The Williams Commission went round and interviewed locals from different parts in Yola and current day Taraba, Jalingo, etc. They interviewed locals from the minority areas and they prepared a report and because the core north then who were partnering with the British realised that if the Middle Belt was carved out from the north, they would be insignificant in terms of population. So, they resisted and ensured that never happened.

“However, in the South, Mid-West was carved out for the nationalities in the South but in the north, the Middle Belt was never carved out. This relationship has continued and the core north has continued to use Middle-Beltans to lord it over Nigeria, boosting their population.

ALSO READ:  South-East To Experience Heavier Military Presence As Nigerian Army Kicks Off Another Round Of Military Operations In The Area

“After the military created states, they still continued to ensure that the north remains as north so that they could lord it over others.

“But what is happening in the Middle Belt today? They are manipulating the Middle-Belt, using religion and other factors so that this relationship will continue but we are saying no.

“We want progress, we want to move forward and will partner with people who want Nigeria to progress; people who want every Nigerian to be able to aspire to be whatever he wants to be; not through a gang-up of 19 northern states and then, you gang up because of colonial arrangement which the British left with us.

“We are saying no. We have seen that what the south is crying about what will bring progress to Nigeria, not what monolithic north will bring and we see that Nigeria has to move forward and we are for development, not for retrogression.

“We are not for stagnation and for that reason, we opted this time to work together with brothers from the south so that Nigeria can move forward, not what we are maintaining and retaining, which is taking Nigeria backwards, instead of moving us forward.”