“My attention has been drawn to activities that took place…

DSS places Jewish worshipers in Nigeria on watchlist for… 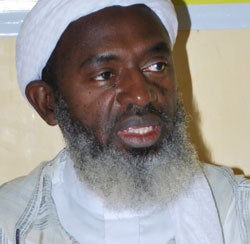 SAHARANEWS – Famous Islamic leader and scholar, Sheikh Dr. Ahmad Abubakar Gumi has condemned the present state of Insecurity witnessed in the country as a result of Boko Haram.

In the video below, he said that Nigeria has witnessed more death as a result of Boko Haram now than during the government of President Goodluck Jonathan. He blamed the current President, Muhammadu Buhari for Boko Haram attacks. He said Buhari’s government is not committed to fighting insurgency as it should.

The Islamic scholar said the way he asked President Jonathan to resign over Boko Haram insurgency is the same way he is now asking President Buhari to resign, even with immediate effect as insecurity is getting worse.

Gumi who could not hide his feelings during the speech felt sorry for speaking against Jonathan.

He admitted that Jonathan’s regime was more democratic as it afforded Nigerian citizens and journalists press freedom.

He also praised Jonathan for building 9 Universities for the North and over 150 Almajiri schools.

At his inauguration on 29 May 2015, Buhari pledged he would defeat Boko Haram and deliver greater security. Even though effort is currently being made to fight the insurgents, the group remains resilient.

ALSO READ:  2023: Remi Tinubu is the only Muslim-Muslim ticket in the APC that can solve Nigeria's political problems.

(VIDEO) Finally Buhari Admits That Nigeria Is A Terrible Country