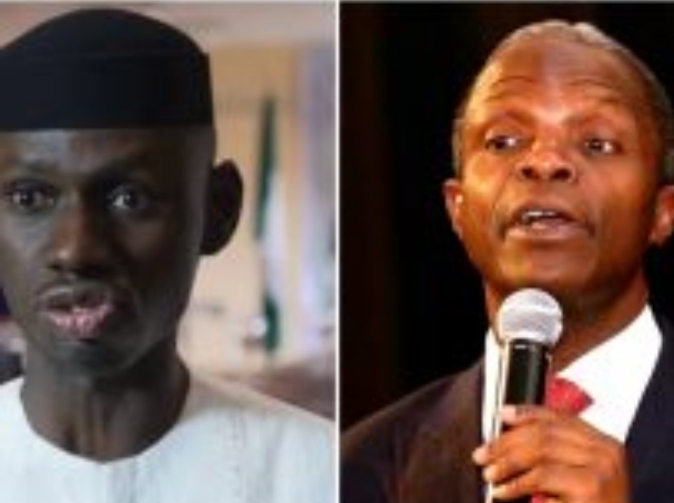 SAHARANEWS – Comrade Timi Frank, political activist and former Deputy National Publicity Secretary of the All Progressives Congress (APC) has said that since Vice President Yemi Osinbajo has sued him, it is time for the Vice President to prove several allegations he made against former President Goodluck Jonathan and former Senate President, Bukola Saraki, among others.

In a statement made available to journalists on Thursday Frank told the Vice President that he won’t be intimidated by going to court, saying the VP had a record of intimidating the media, Civil Societies, and social crusaders. He maintained that the declaration by Osinbajo that he would waive his immunity to pursue a libel case against him, Frank asked “why didn’t he (Osinbajo) do the same when the issue of alleged misappropriation of 5.8bn contract at NEMA came up?

“Why didn’t he sue the wife of the President when she alleged that the Social Investment Programme of this administration has failed. As one who oversees that, I would have expected him to sue the wife of the president or waive his immunity for the relevant graft agencies to investigate him.

“More recently, it was alleged by the spokesperson of the foremost anti-corruption agency in Nigeria that the same N-SIP is riddled with corruption. I wonder why he’s not suing EFCC or the spokesperson.”

While recalling some of the allegations Osinbajo made against some other public officials before, Frank said: “Osinbajo should be informed that his statements against the likes of former President Goodluck Jonathan and Sen. Bukola Saraki will also be used as evidence against him once he enters the dock.

“It is worthy to note that it is in the character of Prof. Yemi Osinbajo to intimidate Nigerians, media houses and civil societies by court processes. He rushed to court and filed a motion ex-parte in 2015 against AIT and NTA not to air a documentary of him. Another case in hand was when Prof. Osinbajo through his solicitors asked google to remove/ suspend a video published by Roots TV from YouTube as it was termed ‘defamatory publication’. Why does he not want Nigerians to scrutinize his person? Is he hiding anything? Has he forgotten he is holding a public office?

ALSO READ:  EXPOSED:Buhari’s Minister Asked Me To Delay The Distribution Of COVID-19 Palliatives--Tambuwal(Video)

“If I were Pastor Osinbajo, what would bother me at this point would be the numerous allegations from within as well as the manifest plot against him because of his alleged financial dealings in some of the agencies under him.”

On the statement that he was ready to waive his immunity, the political activist said: “As heartwarming as Prof. Osinbajo offer to waive his constitutional immunity is, it is really not his to waive. The immunity from prosecution applies to him as long as he remains the Vice President.
If he is certain that the allegations levied against him from all quarters in recent times are false, then he can choose to resign from office to challenge me and others with libel suit. This is against the background that as a sitting Vice President, he is likely to interfere in the judicial process as well as use public funds.

“I am a social crusader and all I have done all my life is to fight for the common man and no amount of intimidation and blackmail will stop me. Prof. Osinbajo is out solely to intimidate the media and civil society groups but I can assure him that I can not easily be intimidated. He knows the people fighting him and giving him out.

What should bother him is the associate that has betrayed him” he said.