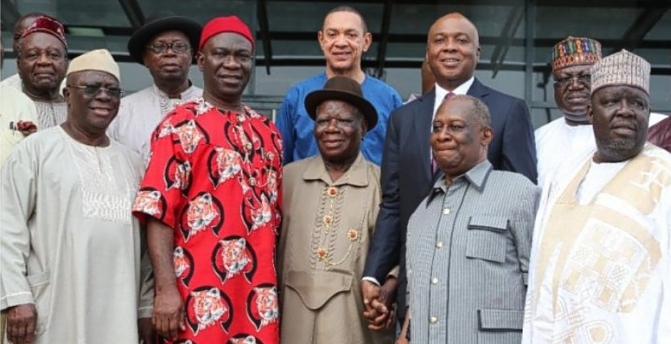 SAHARANEWS – The Southern and Middle Belt Leaders Forum (SMBLF) has frowned at comments made by the Chairman of the Peoples Democratic Party (PDP) board of trusteees, Senator Walil Jubrin in support for the divisive policy of Rural Grazing Area (RUGA) being pursued by the Buhari administration.

Describing Jubrin’s statement as insensitive and impunity, the body condemned RUGA as an ethnic domination programme that seeks to create homelands for Fulani herdsmen all over Nigeria in spite of the terror non-Fulani communities have been subjected to.

Even when these herders are nomads, the SMBLF said southern and middle belt communities have rejected the internal colonialism agenda out rightly.

In a statement jointly signed by Yinka Odumakin (South West), Prof Chigozie Ogbu (South East), Senator Bassey Henshaw (South South), and Dr. Isuwa Dogo (Middle Belt), the group said the PDP board of trustee chair has only confirmed their fears that the policy is an ethnic conquest policy that is at variance with nationhood.

Jubrin had said “I and my ethnic group (Fulani) had embraced the programme. RUGA project includes provision of hospitals, schools, water supply and electricity, among other facilities, which will have direct bearing on the lives of herders.

“Apart from that, it will also tackle the incessant farmers/herdsmen’ conflicts as well as boost food security in the country.” But the southern and middle belt leaders said Sen. Jubrin’s appeal to their zones to accept the obnoxious policy is rejected with no thanks, advising that “he should join his fellow ethnic supremacists to pursue RUGA in the states in the North that have accepted it and spare us his sophistry and non-sequitor.

“Our opposition to the policy remains unwavering and RUGA will only be implemented in our communities after a military conquest of the entire South and Middle Belt as we have told Femi Adesina that we will keep our lands and lives against RUGA policy.

“We are not members of the PDP, though we adopted Atiku as presidential candidate in the last election based on his promise to restructure Nigeria, but we call on all PDP governors in our zones to ignore their board of trustee chair who has spoken as a champion of his ethnic group, but wearing the badge of their party.”