IPOB asks Yorubas, other ethnic nationalities in Nigeria to…

You’re Too Small To Diminish Me, Peter Obi and Ngige… 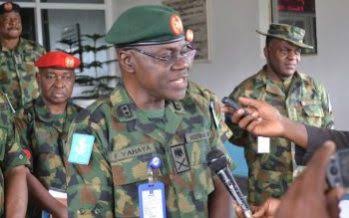 Contrary to calls in some quarters on the military to kill surrendered terrorists instead of reintegrating them into the society, the Nigerian Army has said that global convention for which Nigeria is signatory does not allow such treatment.

LEADERSHIP reports that in the last three months, over 3,000 Boko Haram /Islamic State West Africa Province (ISWAP) terrorists have either been captured or surrendered to troops of “Operation Hadin Kai” in the North East zone.

The figure includes the 1,009 suspects who were cleared and released to Borno State government on July 14, 2021.

In an interview with LEADERSHIP, the director army public relations Brig Gen Onyema Nwachukwu, said the gale of surrendering is due to a combination of kinetic and non-kinetic approaches to tackle the situation in North East Nigeria that is yielding results.

He said the surrendering insurgents have decided to abandon their cause and struggle, having realised that it is a struggle in futility.

“Strategic conflict mitigation provides avenue for surrendering insurgents, who having realised that ISWAP is working against the group interest, rather than the common cause of the so-called union of ISWAP/BHT, “ he said.

He said BHT commanders have been systematically eliminated by ISWAP high command, while the foot soldiers have been relegated.

He said, “The BHTs have therefore decided to toe the line of peace, rather than continue with ISWAP in pursuing interests of foreign non-state actors.

“The actions of Joint Task Force Operation HADIN KAI as a professional force, in receiving and handling of the surrendering insurgents is in conformity with the provisions of the international law and treaties of conflict, to which Nigeria is a signatory and this provides that surrendering combatants be taken into custody, investigated and processed and not to take extrajudicial actions against them, as is the expectation in some quarters, no matter the enormity of their offence. “As a professional military, our role is to take them into custody, profile them and hand them over to relevant agencies of the state for further action.”

He reiterated that the military does not have the powers to prosecute the terrorists whether captured in battle or voluntarily surrendered ones.

“It is not in the purview of the military to prosecute or set them free. It will also be prejudicial to mete out any punitive measure on our part. We cannot as a professional military take laws into our hands.

“This should not be misinterpreted as compromise or weakness. Rather, it should be seen as abiding by global laws of conflict and the provision of the constitution of Nigeria.”

He added that the surrendered insurgents are not camped with the internally displaced persons (IDPs).

“These are two different categories of people. Surrendering insurgents are held in different holding facilities, not IDPs camps,” he said.

There is nothing like unknown gunmen, we know them — Umahi