Bandits would always want to make this kind of attack just… 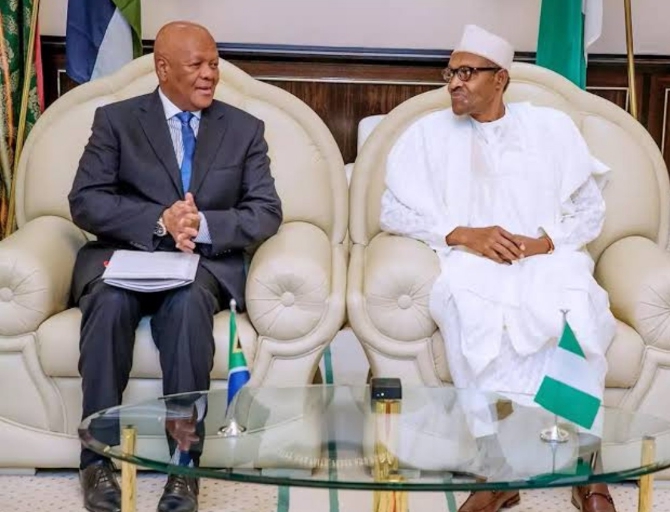 He said there was no Nigerian casualty.

However, many Nigerians in South Africa said they lost properties worth over millions of naira and their fellow countrymen, some of which were allegedly killed by South African policemen.

Radebe instead insisted that the attacks were not targeted at specific citizens of any country.

He said the attacks were “acts of criminality and violence” and “such do not represent our value system, nor those of the larger number of South Africans.”

Radebe said South Africa was an integral part of Africa and is fully committed to peace and integration of the continent.

While apologising to Nigeria, he said South Africa remains eternally grateful for the role Nigeria played in ending apartheid.

During with the South African team, Buhari recalled the roles Nigeria played in engendering majority rule in South Africa and ending the apartheid.

“Going back to historical antecedents, we made great sacrifices for South Africa to become a free state. I was a junior officer to Gen. Murtala Muhammad, and Gen. Olusegun Obasanjo. They were not operating in a democracy, but they got Nigerians to support them in the bid to see a free South Africa.”

“Our leadership was quite committed to the cause. We made sacrifices, which younger people of today may not know. During my last visit to South Africa with the late President Robert Mugabe, it was very emotional, as Mugabe spoke about Nigeria’s contribution to free South Africa,” Buhari said.

President Buhari responded to profuse apologies from the South African President, pledging that relationship between the two countries “will be solidified,” while describing the xenophobic attacks as “very unfortunate.”

Radebe said he hopes that Nigerian President visit to South Africa would solidify the relationship between the two countries.

BREAKING: U.S Throws Weight Behind IPOB, Others Fighting For Their unalienable Human Rights