I Fought Bitter Civil War; We Killed A Million Of Nigerians…

Woman Stays In Similar Room With Her Significant…

Regret losing Peter Obi to LP, he went with the people… 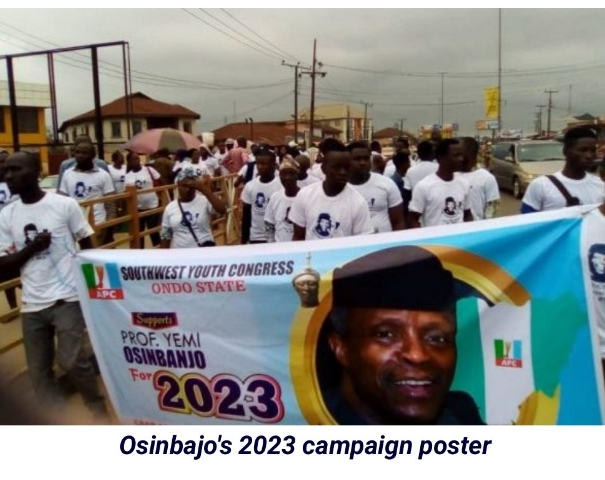 SAHARANEWS – Ahead of the 2023 Presidential election, an APC group has began campaigning for Osinbajo to be president by unveiling his poster.

The group made this known on Thursday during a procession for Osinbajo’s candidacy in Akure, the state capital.   Bamise Akintomide, who led the state chapter of SYC, alleged that

“desperate cabals” are responsible for the “campaign of calumny” against Osinbajo to stop the presidency from moving to the south-west.   “While we are confident that the perceived threat against Professor Osinbajo bears the imprints of a desperate cabal’s wicked strategy for relevance, sadly they have also enlisted the support of agents of calumny of an equally desperate opposition,” he said.“It is our considered opinion that such a campaign of calumny against a decent character like the Vice-President will not hold water in the eyes of right-thinking Nigerians.

“We do know that the orchestrated allegations against Professor Osinbajo, especially the baseless accusation of misusing a non-existent 90 billion naira campaign fund, are all targeted at achieving the singular objective of dissuading the vice president from considering the idea of running for the presidency in 2023.

“While Mr Vice President has not told anyone that he will be running for office in 2023, the South West Youth Congress will like to emphasize that the leadership shown by Professor Osinbajo over the period he has worked alongside President Muhammadu Buhari to pilot the affairs of this country have proven his capacity for effective and result-driven governance, and it is our hope and desire that come 2023 he is on the ballot to run for the highest office in the land.

“If he decides to contest, it’s our belief that he is immensely qualified and therefore he has our support and deserves the support of all well-meaning Nigerians.“While it’s true that there is no amount of gimmicks or lies that can stop Professor Osinbajo from becoming Nigeria’s president if God so wills.”