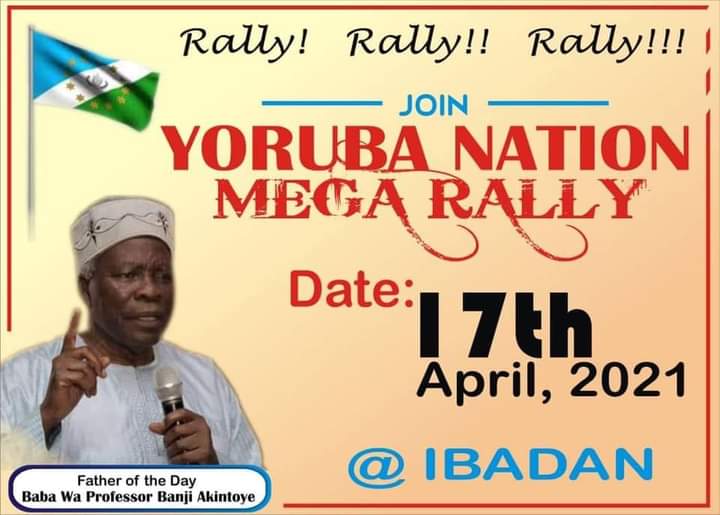 Agitations towards the actualisation of the Yoruba nation, Oduduwa Republic, have again gained some momentum as plans are underway to hold a mega rally in Ibadan on April 17.

A group pushing for a separate nation for Yoruba people, Oduduwa Republic on Tuesday publicised details about the planned march on its Twitter handle.

The flier posted on the page identified the worldwide leader of the Ilana Omo Oodua, Prof Banji Akintoye as the father of the day.

The group, alongside others, have consistently called for the independence of South-West states from the Federal Republic of Nigeria.

Calls for restructuring and constitutional reforms are gradually being relegated to the background as calls for secession have increased over time.
Akintoye on Saturday said there was no going back on the actualisation of the Oduduwa Republic.

He described the Yoruba as a civilised people who cannot continue with the barbarism of the suspected Fulani people that have held Nigeria to ransom, adding that only Ethiopia can be older than the Yoruba people in terms of civilisation.

The don revealed that the anticipated Oduduwa Republic will continue the civilisation agenda of the late Premier of the defunct Western Region, Chief Obafemi Awolowo.

He also stated that the independence of the Oduduwa Republic will be achieved through a peaceful means and not by going to war.

“There is no nation in tropical Africa that is older and also more civilised than the Yoruba nation, except perhaps Ethiopia.

“Yoruba is a civilised nation. When the white man came in the middle of the 19th century and began to spread Christianity through education, our country was better ready to receive education than any tropical nation because missionaries in any part of Africa, had to station in the bush and start looking for people to educate. But our case was not like that in Yorubaland.

“In Yorubaland, you just go to Oba in the city and introduce yourself to say you have come. There’s a photograph of missionaries arriving in Oyo to greet Alaafin in 1883. It was a great picture, with a large number of people, and the Oba himself on the throne and the missionaries in front of him to greet him,” he said.

The octogenarian historian stated that the Nigerian government has put Fulani people in key posts, especially in the security arms of the country, and they have constitutional powers to run most of the affairs of the country via exclusive control.

How 130 Dubai Assets Were Traced To Nigerian Ex-Governors, Senators