BREAKING: Two Israelis killed in a stabbing attack in West… 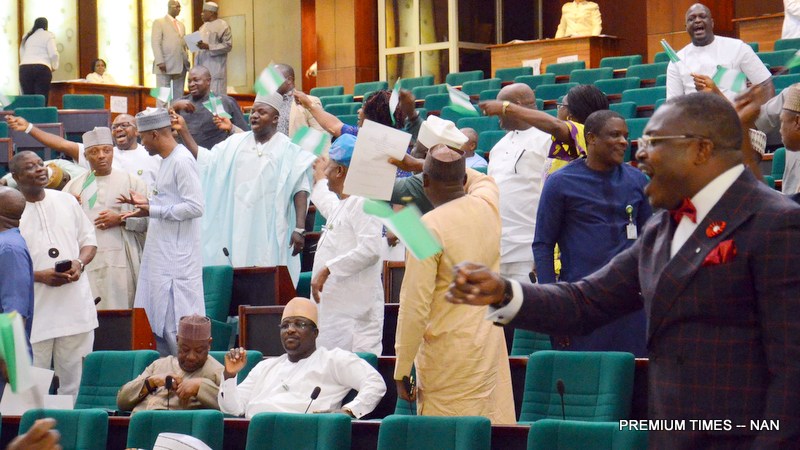 The All Progressives Congress members in the House of Representatives and their counterparts in the Peoples Democratic Party on Wednesday traded words over the decision of President Muhammadu Buhari to withhold assent to the Electoral Act (Amendment) Bill.

While the APC Caucus of the House of Representatives emerged from a closed-door meeting on Wednesday to back Buhari’s decision with a vow to ensure that the National Assembly’s planned move to override the President’s veto failed, their PDP counterparts said the President’s action was against the interest of the country and they would challenge it.

The APC caucus described the bill, which was the fourth version the National Assembly would pass and transmit to the President, as an “imperfect document.”Leader of the caucus and Majority Leader of the House, Mr Femi Gbajabiamila, who addressed journalists in company with other members, argued that the National Assembly could not override Buhari’s veto, especially as the President also pointed out clerical errors in the bill

Asked about the agenda of the meeting, Gbajabiamila said, “It was a one or two-point agenda. What is in the front and centre right now is the electoral amendment law, which the President has not signed and there are calls for us to veto same. But let me say very quickly: perhaps, a lot of people don’t understand the import and the implication of signing an imperfect document.

“If the document is imperfect and you can read it or interpret it anyhow, or if a clause was removed when it should have been there, then you can’t even override an imperfect document. You have to first of all amend that document and start the process all over again, and send it back to Mr President.”

The lawmaker further argued that even though the President cited the reason for vetoing the bill, the constitution does not compel him to explain his decision.

“Mr President has done well. If you study the constitution very well and if you look at Section 57, it does not oblige him to give any reason for veto. All he has to do is return it and say, ‘I am withholding my assent.’ He doesn’t have to give you any reason. But every time he has done that, he has brought forward cogent and verifiable reasons why he is not signing it.

“On this particular one, I believe the thrust, spirit and the reason why Mr President has refused to sign it, which we identify with, is that every vote must count in Nigeria. We have been mouthing this thing and singing this thing for ages.”

Gbajabiamila recalled that the APC lawmakers had while debating the bill, warned against making electronic accreditation of voters in an election compulsory as the bill intended.

He said, “It forecloses manual registration. When you do that; we were all witnesses to what happened in the last election; even the sitting president could not be accredited. So, what Mr President has done is to protect everybody in Nigeria.

“Yes, do your electronic accreditation but make room for the possibility – and a very strong possibility too – where such will not work. It is something that happens every day in the banks. Jammers can even be brought in to jam it. Millions will be disenfranchised and you and I don’t want that.”

Gbajabiamila also cited the Economic Community of West African States protocol “that everybody has been talking” about as worthy of consideration.

Responding to a question on the fact that lawmakers in the Peoples Democratic Party were insisting on overriding the President’s veto, Gbajabiamila challenged them to gather the required two-thirds majority to hatch the plot.

“Lawmaking is not about insisting; law-making is about numbers. If they are able to muster two-thirds and they want to push it through, there is nothing we can do. But as a party, we are not going to be part. As I said earlier, you cannot override an imperfect document. It makes no sense. It is garbage in, garbage out,” he said.

Gbajabiamila further argued that it was wrong to describe the declination of assent to the bill as a failure on the part of the legislature. He blamed the Department of Legal Services of the National Assembly for the errors in the document.

“Go to our legal department here, perhaps, you have one or two personnel. So, the blame will fall on the legal department. Yes, it does not speak well of the National Assembly, but we have done our work in terms of the principles of the any law we have tried to pass. It is for them to do the final ‘dot the i’s and cross the t’s.’

“Again, when the National Assembly asks for more money for staff and do things, we are met with a brick wall. It is a difficult scenario that we have found ourselves in. It is not the National Assembly’s fault, but if I were to blame anybody, I would say it is our legal department.”

Responding on Wednesday, the PDP Caucus in the House described the position taken by the APC caucus as inconsequential.

Speaking with our correspondent, the Minority Leader, Mr Leo Ogor, said, “That is totally inconsequential because the most important thing is that national interest is more important. The hearsay or whatever they are saying has nothing to do with the issue. If they want to play politics, let them play politics.”

Asked if the PDP lawmakers were still bent on overriding the President’s veto, Ogor said they had “not thought of it yet but the options are still available.”

When further probed to state where the caucus stood on the reason cited by Buhari for not assenting to the bill, the Minority Leader said, “Let us call a spade a spade. National interest is more important. You need to look at the whole issue and judge for yourself. If anybody has any interest, to God be the glory.”

JUST IN: They excluded me because they know I will expose what I know about Buhari – AAC presidential candidate.