Davido is busy campaigning for his uncle Ademola Adeleke…

ALARMING: Not less than 108 police personnel in active… 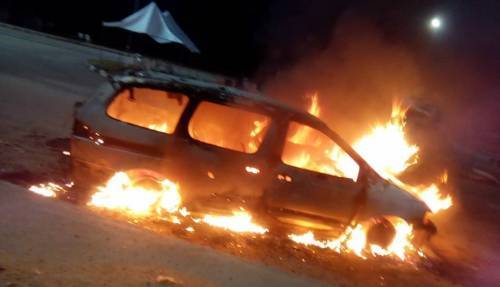 SAHARANEWS – Some Suspected gun haulers Where yesterday set Ablaze by Irate Youths. Ahead of presidential and national assembly elections rescheduled to February, 23rd 2019, a station wagon golf alleged to have been overloaded with arms has been burnt to ashes by some youths around the area before police arrived at the scene.

SaharaNews gathered that Two out of the three were arrested while one was killed on the spot . The incidence occurred at anguwar dallatu area along new motor park station, Gusau.

It could be recalled that Zamfara state is the stronghold of banditry, cattle rustling and kidnapping where possession of arms are common.

UNBELIEVABLE: See Atiku’s Reactions Over Election Postponement, What He Told Nigerians To Do

BURSTED: The IPOB’s Call Off Of Election Boycott Forced Buhari And INEC Into The Last Minute Postponement of 2019 Elections As IPOB Sets To Resist The Already Perfected Plans To Rig The Elections