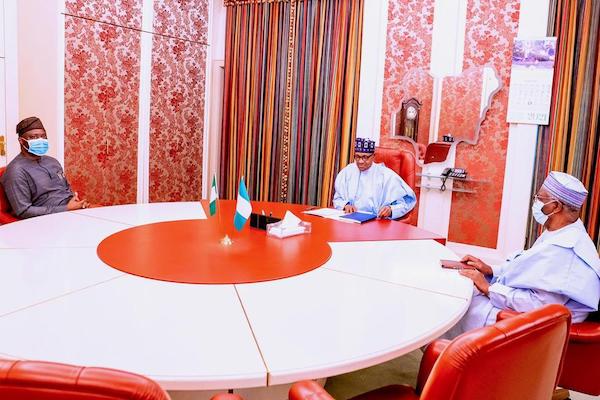 The Governor of Oyo State, Seyi Makinde, and his Ondo State counterpart, Rotimi Akeredolu, on Wednesday met with President Muhammadu Buhari at the State House in Abuja.

A source close to the governor told SaharaReporters in Ibadan that the Oyo State governor asked President Buhari to deploy more mobile police squadrons to the state.

The source said, while speaking with Buhari, Makinde decried the increase in the level of insecurity in his state.

The source however noted that Makinde promised the President that he would continue to protect the Constitution of the Federal Republic of Nigeria.

The source said, “I can’t really disclose the whole discussion my boss had with President Buhari. You will get the full ‘gist’ of their discussion when he returns. But I am aware that the governor asked for more mobile police squadrons in the state.

“He also decried the level of insecurity in the state but let’s wait for the full gist when he returns.”

The response of the President to Makinde’s demand was not clear as at the time of filing this report.

There has been tension in the South-West following seven-day ultimatums issued to Fulani herdsmen recently by the Ondo State Governor, Rotimi Akeredolu, and a Yoruba activist, Sunday Igboho, to vacate forest reserves in the Ondo and Ibarapa area in Oyo State respectively.

Makinde had earlier directed the immediate deployment of 200 operatives of the Oyo State Western Nigeria Security Network, better known as Amotekun, to the Ibarapa Local Government Area of the state.

The directive was contained in a statement issued on Wednesday, in Ibadan.

Makinde said the deployment of the Amotekun Corps followed a meeting with security agencies and stakeholders in the crisis-torn area.

Fulani herdsmen have been accused of perpetrating crimes ranging from kidnappings, killings, rape to invasion of farmland with their cattle in Ibarapa area.

Makinde’s statement read, “Following the meeting held with representatives of Igangan, Ibarapaland which was attended by security stakeholders, including the recently appointed Commissioner of Police, Oyo State, Mrs. Ngozi Onadeko, our administration has come up with a security strategy for that zone.

“We have resolved to redeploy 200 members of the Oyo State Western Nigeria Security Network, codenamed Amotekun to kidnapping/banditry hotspots in the state, especially in the Ibarapa and Oke-Ogun zones.

‌“These operatives will launch missions to rid the forests of criminals. They will be presenting daily reports of their activities to me in the short run and periodic reports in the long run.

“In the next few weeks, we’ll hold town hall meetings and community outreaches, bringing together residents and security agencies to talk about any issues of immediate concern and how they can be resolved through dialogue and more effective community policing.”

Igboho has been in the news since last week when he gave Fulani herdsmen in the Ibarapa area of Oyo State seven days to leave, blaming them for the worsening cases of kidnapping and killing in the state.

He also accused the Seriki Fulani of Igangan community in Ibarapa, Alhaji Saliu Abdulkadir, of colluding with the suspected killer herdsmen and taking shares from the ransoms they get from families of their abducted victims.

Some days after he gave the ultimatum, the residence and cars of the Seriki Fulani were burnt and the Fulani leader and his family had to flee for their lives.

Similarly, one of Igboho’s houses in Ibadan was also burnt on Tuesday, sparking speculations that the arson might be a retaliation by Fulani herdsmen for the burning of the Seriki Fulani of Igangan’s house.

Also, on Tuesday, operatives of Amotekun in the state intercepted a truck loaded with gunmen suspected to be herdsmen heading to Igangan community in the recently troubled Ibarapa.

The truck, with registration number TUR30ZY, is registered with Kebbi State and the Amotekun officials found 25 guns and 10 dogs in the truck alongside the suspects.

JUST IN:Many Would have Being In Jail If Buhari Was Fighting Corruption – Wole Soyinka