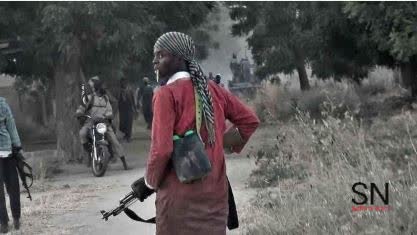 SAHARANEWS – The Boko Haram sect has reportedly killed 25 soldiers and scores of civilians in an ambush in Borno state.
The insurgent group reportedly attacked the soldiers on Saturday morning while they were evacuating people from villages in the state.

“They exchanged fire for some minutes before the Boko Haram militants overpowered the soldiers.”
On Wednesday, the group had released videos of some military men believed to have been captured on the battlefront in the north-east.

The insurgents paraded some of the captives before cameras and they identified themselves with their military service numbers, units and names.
Personnel of the Nigerian army, Nigerian navy, Nigeria police force who were among the captives disclosed the locations they were captured.

The Nigerian military has continued to suffer heavy losses as Boko Haram fighters have launched several attacks on their formation in the north-east.
On May 3, the Islamic State (IS) said it killed 10 soldiers in an attack on a barrack in Magumeri, a community in the state.