JUST IN: Buratai Reacts To Atiku’s Statement, Asking Army To…

BREAKING: Lawmaker Allegedly Beat Up A Woman, Unclad Her, Tie Rope Around Her Waist And Forced Her To Dance Naked In public 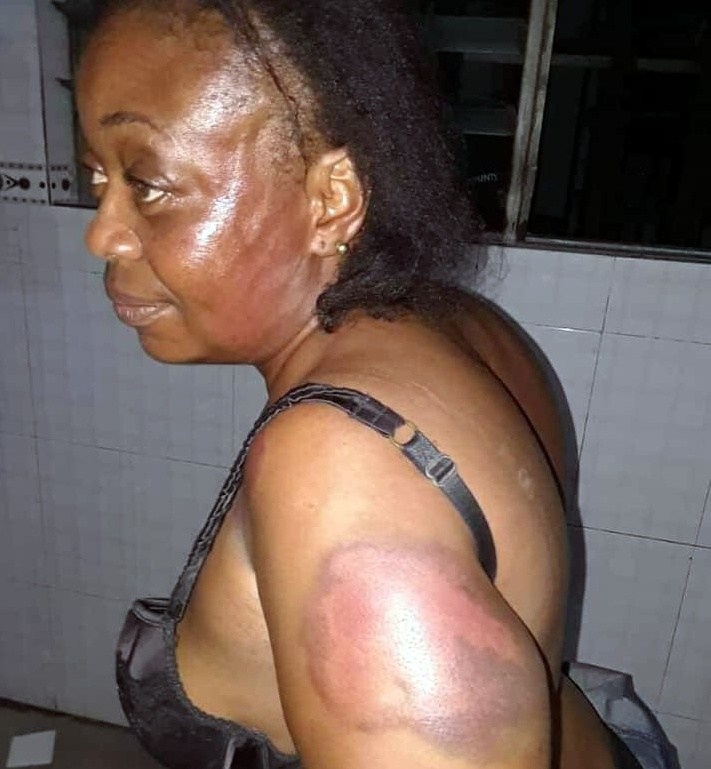 SAHARANEWS – A local lawmaker in Akwa Ibom state has appeared before a state High Court in Uyo for allegedly assaulting a woman and stripping her naked in the public.

Mr Nseobot and his wife, Aniedi, were charged to court on July 11 by the Akwa Ibom state government for allegedly kidnapping, assaulting, and publicly stripping the woman, Iniubong Essien, whom they had accused of stealing some naira notes.

They said the money was “sprayed” on them at their wedding — a common practice at Nigerian festivities.

Ms Essien, who has been a close friend to the councillor’s wife for about 10 years, denied stealing the money.

She told newsmen that she assisted the Nseobots in cooking and serving food to their wedding guests and that she was not even the person who helped the couple to pick money donated to them at the wedding.

The councillor and his wife, supported by their friends, were said to have abducted Ms Essien from her home in Uyo in the morning, around November last year, drove her to a village in Ibiono, about 27 kilometres.

She was then taken to a village hall around 10 a.m.

“I was beaten and forced to walk stark naked in the village hall, they removed my dress, my bra, and my pant, Ms Essien, who is over 40, told our reporter.

ALSO READ:  The UK Government must understand that IPOB's grudges against them has not reached to the extent that warrants assassination of their citizens in Biafraland

“People were inside the village hall, I think he (the councillor) may have told them that he was bringing a thief for them to beat, so the whole place was filled with people.

“He was mixing charcoal with pepper to rub on my body, but he didn’t rub (it) on me. They tied a rope around my waist and said I must dance naked before the village people.”

Ms Essien said the councillors, his wife, and their friends used their mobile phones to take photos and videos of her, while she was naked and being beaten.

At the courtroom, the councillor, Mr Nseobot, stood in the dock with a forlorn look. He crossed his hands behind his back.

His wife, said to be resident in the U.S, was not present in the court.

The judge, Archibong Archibong, struck out the wife’s name from the charge sheet, following a request from the prosecution counsel, Godwin Udom.

The prosecution counsel withdrew his earlier application for a bench warrant against the councillor.

The counsel to the accused, Mfon Ben, informed the court he has filed an application challenging the validity of the charges against his client.

His request that the councillor should not take his plea until the court disposes of his objection was accepted by the judge, and the case adjourned to October 14 for the court to hear the argument on the preliminary objection.

The incident, which was brought to public attention through Facebook, shocked the Akwa Ibom community on the social media site, with people calling on the state government to ensure justice was done in the case.

Akwa Ibom people in the Diaspora, led by an environmental activist in the U.S, Tom Mbeke-Ekanem, sent a petition to the Akwa Ibom governor, Udom Emmanuel, last month demanding justice for Ms Essien.

“We want to see both suspects, Uduak Godwin Nseobot, and his wife, Ms. Aniedi Matthew prosecuted for taking laws into their hands by abducting, stripping naked and unclad, tying a rope around the victim’s waist, and grievously battering her,” said the petition endorsed by 95 persons, including persons resident in Akwa Ibom.

“These actions are barbaric, bizarre and a gross violation and contravention of Iniubong’s human right.

“Above all, it portrays Akwa Ibom State negatively as her unclad pictures had been trending on social media and pages of national newspapers with the scars and blisters all over her body. Akwa Ibom people want justice not only be done but seen to be done expeditiously. Hopefully, this will serve as a deterrent to others.”

The chairperson of the Nigeria Association of Women Journalists in Akwa Ibom State, Uduak Ekong, told newsmen on Friday that her association would keep a close watch on the court case.

“It is barbaric at this age and time that the world has moved on that such an action could take place,” Mrs Ekong. “I am worried because he didn’t do it alone; there were people around when he took that action on the woman. My concern is, what moral lesson was he trying to give out to the younger people? That it’s okay to treat a woman or any human being like that?

“I am trying to imagine what it was that he had at his wedding that she could have taken to warrant such treatment.

“I am hoping that the court at the end of the day would give the kind of punishment that would deter people who think That because they are in a particular position today they can take certain actions with impunity and feel that nothing will happen.”

The victim of the alleged assault, Ms Essien, sells cloths and household items in Uyo.

Recalling the incident, she told newsmen Friday, “I feel very sad. “I don’t have a way to express how I feel. All I want is justice.”

BREAKING: Gov Wike Vows To Pay The N30m Bounty He Promised After The Army Capture The Notorious Kidnapper Bobrisky