Bury the thought of declaring state of emergency in Anambra… 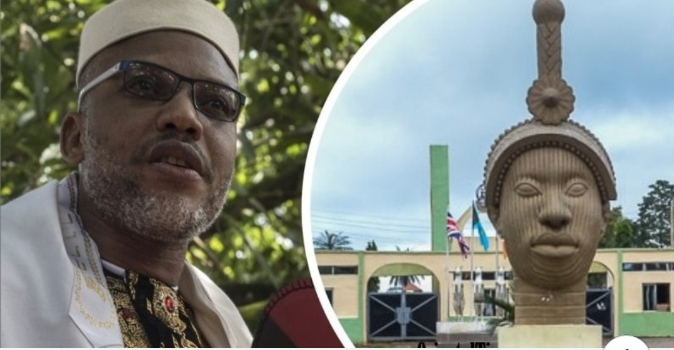 SAHARANEWS – Leader of the Indigenous People of Biafra (IPOB) Nnamdi Kanu has expressed delight over the letter written by Oodua Groups to the Sultan of Sokoto and other Fulani leaders.

The Yoruba groups in the letter had called the attention of the Sultan of Sokoto, Muhammadu Sa’ad Abubakar to the alleged drumbeats of armed violence and extremism perpetrated largely by the Fulani people.

The group reminded the Sultan that there was no history of Fulani in Nigeria until 1804. According to them, “this was 800 years after the Yoruba Kingdoms had been established, about 600 years after the Hausa, Ijaw, Tiv, Igala, Junkun Kingdoms had flourished. The Igbo Nation had existed for centuries before your people wandered into this hemisphere.”

The Oodua Groups amongst many things also told the highly respected Fulani leader that an Independent Yoruba and Igbo republic is not just imminent but inevitable.

Reacting to the letter, Nnamdi Kanu applauded the group and prayed that Yoruba people develop a very strong heart to finish the struggle of freedom regardless of monetary inducement or promise of presidency in 2023.

The IPOB leader said the Yoruba nation will have the unalloyed support of IPOB as long as they remain determined, serious and committed to freedom for the Oduduwa Republic

ALSO READ:  "I Least Expected That Kind Of Violent Attacks From IPOB But I Didn't Hold It Against Them" - Ekweremadu Speaks On Attack In Germany

Disclosing this on his Facebook page, Mazi Nnamdi Kanu wrote: