Atiku Not Fit To Contest For President, Nigeria’s AGF Malami…

BREAKING: Tension In Abuja As Shiites Members Break Into… 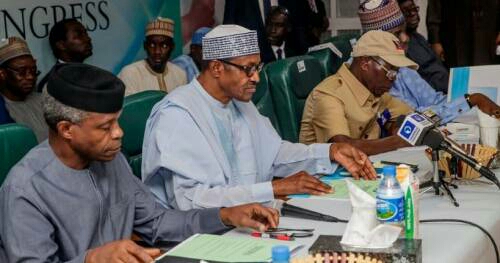 SAHARANEWS – President Muhammadu Buhari has made another juicy appointments on Wednesday.

The appointment of Ojekwe-Onyejeli and Umar-Sadiq was disclosed by Mr. Jide Zeitlin, Chairman, NSIA Board of Directors in a statement on Wednesday, the Nation reports.

“Followed the realignment in 2018 of NSIA’s strategy with a pivot towards domestic infrastructure, as reflected in the allocation of 50% of future contributions to infrastructure investments.

“These appointments strengthen the Authority’s executive team and are consistent with our focus on maintaining a broadly representative leadership team and workforce so as to ensure that the institution remains a key participant in Nigeria’s economic transformation.

“Both appointees are committed professionals who, along with other talented colleagues, have been instrumental in NSIA’s development,” the statement read.

REVEALED: One S’East Gov Set To Defect To APC Before May 29th – See photos