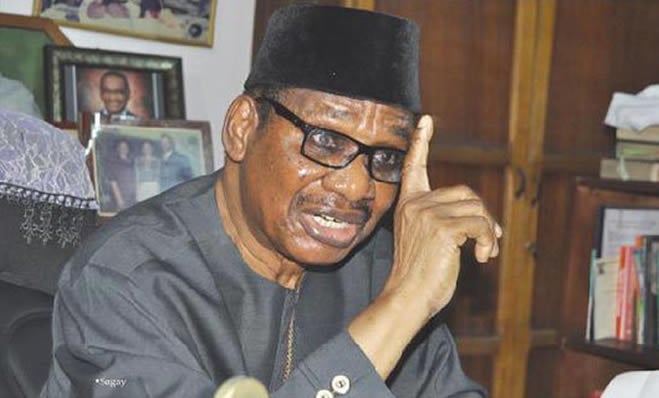 The Chairman of the Presidential Advisory Committee Against Corruption, Prof Itse Sagay, has called on the President, the National Assembly and all concerned authorities to empower every Nigerian to carry arms.

Sagay, President Muhammadu Buhari’s anti-corruption adviser, noted that this would help to make for a balance of terror, saying Nigeria was gradually sliding into a Hobbesian state where life is brutish going by the activities of kidnappers, bandits, terrorists and herdsmen.

Sagay’s suggestion seems to be at variance with a directive by Buhari only last week that security agencies should henceforth shoot anyone bearing AK-47 rifles in the forest or anywhere.
In an interview with the Sun, the Professor of Law said the government should also force Islamic cleric, Sheikh Ahmad Gumi, to lead security agencies to the abode of the bandits in the forest.

Sagay said, “The country is really stretched. I have never seen this country like this before, where at every corner, there is somebody committing one violent crime or the other. Although it is more in the North, the South is not safe. In the South-West now, you can’t travel by road because people will jump out of the forest and stop and then abduct you. I have never seen a thing like this.

“A community would be sleeping, and then some people would just come killing them. I have made this suggestion before: we should all be armed so that anybody coming to attack you will know that he too has no chance of surviving. Communities should be armed; individuals should be armed. That is balance of terror.

“For example, if as a farmer, a village in the South-West is under the threat of Fulani herdsmen who one governor has said were entitled to wield AK-47 rifles which they carry about, then I need to carry mine so that when they come to my farm, we confront each other. He, with gun, and, I with gun, then he will know that it is dangerous to come to my farm. At that stage, when there is certainty that the man whom he is sent to attack can resist and use equal force, you will see that this thing will die down.
“I always wonder when the youths cry out in various places, including my own Delta and other areas in the East and West that the Fulani herdsmen have overtaken our villages, our farms. Why can’t those youths gather together and seek arms and fight back? People need to fight back with arms and not with bare hands. The Federal Government should think of loosening the rules governing arms bearing and allow persons and communities that are under attack to have arms to defend themselves.

“Like in America, everybody has arms; if you are going to raid somebody’s house, you know that it is a big risk. Or, if it is a farmer and he is armed, you know it is a big risk going to kill him, to destroy his crops, to rape his wife or bring your cows to come and eat all that he has spent a whole year planting, probably with bank facility, destroy everything so that he has nothing to eat because you have cows? No, everybody is entitled to defence.”

These are the States that Have Already Accepted, Ranching To End Farmers-Herdsmen Crisis— Osinbajo