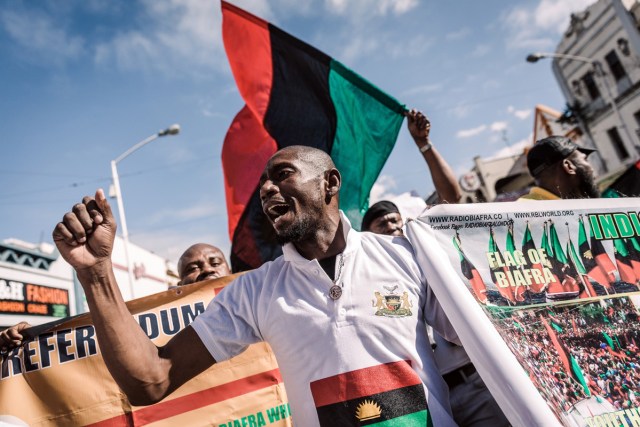 The Indigenous People of Biafra has condemned the Nigerian Army for the alleged killing of innocent people in Akwa Ibom and Benue communities.

The IPOB accused soldiers of killing many innocent people in the two states under the guise of searching for bandits.

According to the group, in a statement released on Friday by its spokesman, Emma Powerful, the Nigerian military is only after pro-Biafra people while leaving bandits and terrorists that are operating in the North to live freely.

“We, the Indigenous People of Biafra (IPOB) ably led by our great leader Mazi Nnamdi Kanu, wish to bring to the attention of the world how Nigerian government and her security operatives are killing innocent Biafrans in Essien Udim Local Government Area in Akwa Ibom State.

“The Nigerian military has been killing these innocent and hapless citizens claiming they are the unknown gunmen behind the spate of attacks against security formations in the region.

“The Nigeria military has been using their aircraft to bomb the people of Essien as well as Benue, claiming they are fighting the unknown gunmen purportedly hiding in the area. This has again exposed the hypocrisy of the Fulani-controlled Nigerian military.

“They cannot use their aircraft against terrorists and bandits daily killing their soldiers as well as civilians like flies but zealous to bomb Biafran territories under the guise of searching for unknown gunmen,” the statement said.

The group accused the army personnel of inflicting unnecessary pains on its members, stating that it began in Orlu, Imo State. It, however, stated that the mayhem caused by the soldiers are to intimidate its members clamouring for Biafra.

It therefore vowed not to be deterred from its course in the face of brutality allegedly being committed by the security agents.

“In February, it was Orlu in Imo State that they massacred civilians using their aircraft. Now it’s Essien Udim in Akwa Ibom. But an Islamic cleric has been dining and wining with terrorists, taking pictures with them, yet the double-faced Nigerian military cannot use its aircraft to trace their location.

“How can a responsible military use helicopters, gunboats, and military jets against ordinary citizens? Boko Haram and other Fulani terrorists group have been killing soldiers and police in the North East and North West without soldiers using the military to terrorise innocent citizens.

“We want to make it clear to the whole world that the Nigerian security agencies including the Army, police and the Department of State Services have been giving fake intelligence reports against peaceful citizens of Akwa Ibom State.

“They have claimed the presence of unknown gunmen in the community to provide a cheap excuse to further send innocent Biafrans to their untimely grave. But their threats and killings cannot deter us from our resolve towards the restoration of Biafra, a divine mandate we cannot shirk.

“The Indigenous people of Essien Udim LGA in Akwa Ibom, Biafra land, must remain strong in this quest for freedom. What the military is doing is to intimidate them to submission but they must remain resolute.

“The actions of the Fulani Janjaweed presidency in the bombing of civilian villages in Akwa Ibom and Benue State is a clear indication that these territories are indisputably Biafra, and the thirst for freedom cannot be easily extinguished by aerial bombardment.

“Constant attacks on our innocent people will spell doom to Nigeria soon. We are not going back until Biafra finally comes. All those behind the genocidal attacks against innocent Biafrans must pay for their atrocities

BREAKING:Ajagba wins again, knocks out Howard in third round