“Aso-Rock Is Empty, Buhari Not In Charge” —… 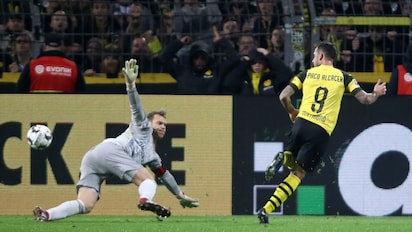 Paco Alcacer’s late goal helped Borussia Dortmund defeat Bayern Munich 3-2 in a tough Bundesliga fixture on Saturday, November 10, to go four point clear at the top of the log. The encounter at Signal Iduna Park saw Robert Lewandowski score the opener with his head on the 26th minute.in a thrilling Der Klassiker showdown. Marco Reus leveled scores for the home side at the restart of the second stanza through a penalty on the 49 minute,.but the hosts were caught off guard after Lewandowski scored his second of the game, with a close-range header.to hand Bayern the lead after 52 minutes of football.

Despite the setback, Dortmund were more business-like with England’s Jadon Sancho taking charge of the right, Reus executed a first-time strike that sailed into the far corner of Bayern’s net. With less than 30 minutes of play left on the clock, both sides had other scoring chances to take the lead, but it was Dortmund’s Alcacer who made his count after running clear of Bayern’s defence line to apply a sublime finish over Manuel Neuer with 17 minutes left.

Interestingly, Belgium star Axel Witsel, who joined Dortmund in the summer played a key role after delivering the killer pass for Alcacer to net his eighth league goal of the season. Bayern had a chance for a late equaliser, which almost arrived from a free-kick from Kimmich but it was mistakenly headed back towards his own goal by Reus, who could only watch as the ball dropped past the post.

During the added time, Lewandowski flicked the ball home from close range but he was ruled offside flag once again, with the VAR. ruling the decision on point. Despite other goal scoring opportunities the scores remained 3-2 at the blast of the final whistle. The results see Dortmund go four points clear of Borussia Moenchengladbach at the top of the, Bundesliga log, with Bayern now seven behind the Lucien Favre’s young side after 11 matches.

Meanwhile, two Premier League rivals Liverpool and Chelsea are reportedly battling head-to-head to seal a move for Borussia Dortmund’s ace Christian Pulisic. According to a Read Liverpool report citing Mercato365 and Calciomercato, the clubs are eager to land the American international, who has netted twice in six matches in the Bundesliga this term.

Equally, Pulisic has been rated as one of top performers, in the German topflight in recent seasons.