Be Bold Enough To Admit You Cannot Handle Boko Haram, Buratai Under Fire For Seeking Spiritual Warfare To Defeat Insurgents 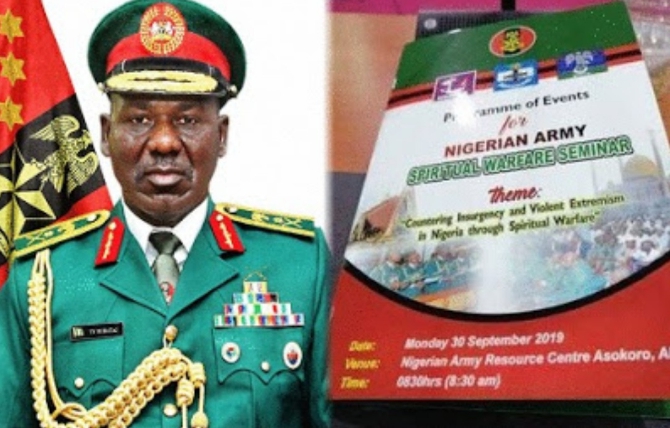 SAHARANEWS – Chief of Army Staff, Tukur Buratai, has come under attack for calling for spiritual warfare to defeat terrorist group, Boko Haram, and its splinter group loyal to the Islamic State, ISWAP.

Buratai on Monday at a spiritual warfare seminar at the Nigerian Army Resource Centre in Abuja themed ‘Countering insurgency and violent extremism in Nigeria through spiritual warfare’ called for religious bodies in the country to come to the ‘forefront of the spiritual battle.

’Buratai was represented at the seminar by the Chief of Administration, Maj. Gen. Sani Yusuf.

“It is easier to defeat Boko Haram and ISWAP terrorists than their ideology because while we degrade the terrorists and their havens, the narrative of the ideology grows the group,” he said.

“Therefore, communities, families, and groups should join in the fight and narratives to reject and prevent the ideologies of the terrorists and extremist groups.

“Religious bodies and organisations in particular, which interface regularly with the grassroots, should be at the forefront of this spiritual battle and fashion out ways of stepping up their roles.

“It is a well-known fact that terrorism and terrorist groups cannot be totally eliminated by mainly military actions. This means focusing our efforts on the underlying narratives through ideologies employed by these terrorists to lure innocent citizens into their fold.”

Nigerians on Twitter have appeared unimpressed with Buratai’s comments.