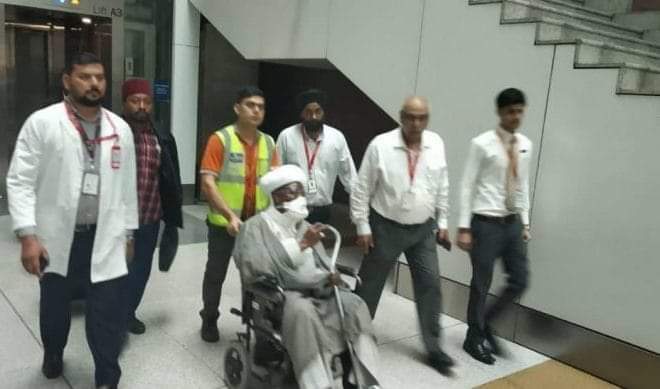 SAHARANEWS – The leader of the Islamic Movement in Nigerian, IMN, popularly known as Shiites, Ibrahim El-Zakzaky is on his way back from the Indian hospital where he had gone to receive medical attention.

This was confirmed by the spokesman for the IMN, Ibrahim Musa.

According to him, the Shi’ite leader would begin his return journey back to Abuja at 5pm Nigerian time.

According to a tweet by the Zakzaky Office, Mr El-Zakzaky is expected to arrive Abuja at 17:00 hours Nigerian time.

An accompanying video clip on the Twitter handle also showed Mr El-Zakzaky explaining that the Indian hospital had agreed to allow him and his wife Zeenat to come back to Nigeria, following a stalemate over the choice of doctors to attend to them and the terms of treatment.

Recall that on Wednesday, days after arriving at the Medanta Hospital, New Delhi for medical attention, Mr El-Zakzaky had cried out over what he described as the pathetic and worrisome situation he had been subjected to in India’s hospital.

In an audio clip rendered in Hausa language, Mr El-Zakzaky lamented over the tight security around him in the hospital as well as their refusal to allow his personal doctors to supervise his operations.