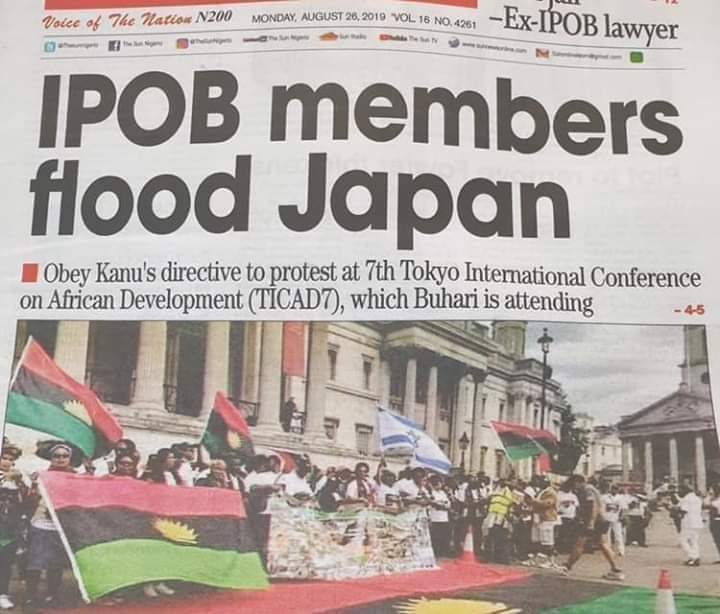 SAHARANEWS – The Presidency has reacted to the plan by members of the Indigenous People of Biafra (IPOB) to attack President Muhammadu Buhari in Tokyo, Japan.

SaharaNews had reported that IPOB leader, Nnamdi Kanu, gave an order for his members to attack the Nigerian leader who is participating in the 7th Tokyo International Conference on African Development.

Kanu in a letter obtained by SaharaNews, had written to his Imperial Majesty of the most esteemed and revered throne of Chrysanthemum, Emperor Naruhito of Japan, informing him of the plan.

He said the IPOB will not only disgrace but also arrest President Muhammadu Buhari who allegedly died long ago in January 2017 and buried in Saudi Arabia.

According to him, IPOB planned campaign of public arrest of the “impostor” in Tokyo is directed at Jubril Al-Sudani “the fake President of Nigeria”, not Buhari who he said died long ago in January 2017 and buried in Saudi Arabia.

“The Japanese authorities we know are best placed to unravel and confirm the true identity of Jubril”, Kanu stated.

Members of the IPOB were seen flying into Japan from different part of the world, ahead of the President’s arrival, in exclusive photos obtained by Igbere TV on Monday.

Reacting, Chairman of Nigerians in Diaspora Commission (NIDComm), Mrs. Abike Dabiri-Erewa, said the plan to attack Buhari in Japan by IPOB was not only careless, but disrespectful.

Dabiri-Erewa, who spoke on Monday in an exclusive interview with Lagos FM, threatened to be be ruthless on IPOB members if they dare carry out their threat.

“The call to attack President Buhari in Japan by Nnamdi Kanu is not just careless but also disrespectful to the core. Who does he think he is? If his group tries anything in Japan, I personally will take it upon myself to see that they are dealt with this time around.

“We are yet to forgive them on the assault on Senator Ike Ekweremmadu (in Germany) and they are planning to disrupt the President’s visit in Japan”, she stated.

BREAKING: Aso-Rock Restless, Buhari Yet To Be Sighted In Japan As Angry IPOB members Continue To Troop Into Japan – See Photos