BREAKING:Putin’s unilateral ceasefire in Ukraine is…

BREAKING: Petrol Price Should Be N183 Per Litre—Timipre Sylva 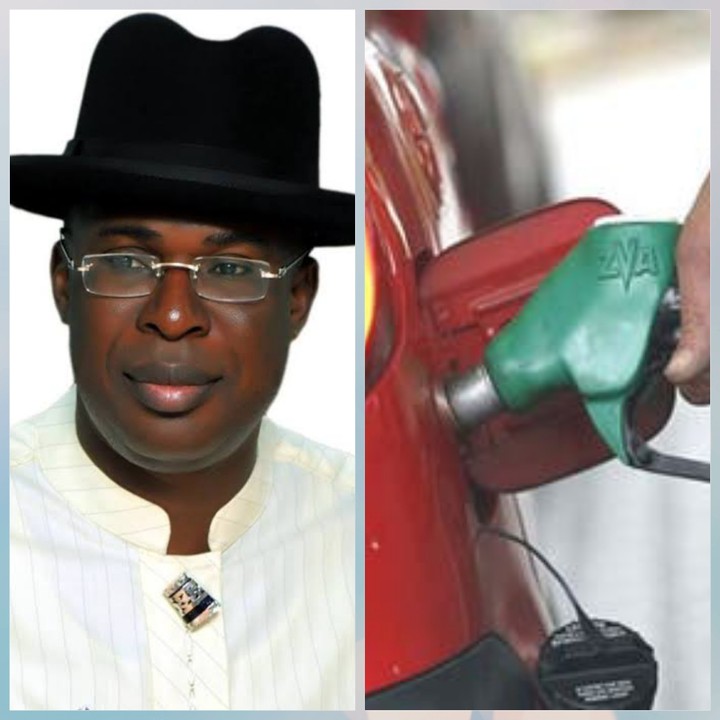 The Premium Motor Spirit (PMS), popularly called petrol should be sold for N181 per litre, if all costs implications are considered and factored in rather than the present pump price of N161; the Federal Government disclosed on Tuesday.

The Minister of State for Petroleum, Timipre Silver, made this known even as he pointed out that Nigeria lost a total N10.413 trillion to subsidy between 2006 and 2019, while between the year 2016 and 2019, the Federal Government lost a total sum of N2.193 trillion on subsidy.

Silver was speaking at the bipartite meeting between the Federal Government and the Organised labour, held at the Banquet Hall of the Presidential Villa, in Abuja. The Federal Government was led by the Minister of Labour and Employment, Dr Chris Ngige with five other ministers and chief executives of relevant government agencies; while the organized labour was led by the President of NLC, Comrade Ayuba Wabba, and the TUC President, Comrade Quadri Olaleye.

In its presentation titled: “Understanding the Impact of fuel Subsidy on the Nigerian Economy… and the Gains of Deregulation,” the Silver pointed out that if the sector was fully deregulated and the dollar exchange rate was fully factored in, the fuel price would not be N161 but N183 per litre.

The minister of state for petroleum said with the present price increase, the price of fuel in Nigeria at N161 per litre is still the cheapest in the sub-region, comparing with Senegal N549 equivalent, Cameroon N449, Benin N359, Ghana N332 and other neighbouring countries.

He said: “Between 2016 and 2019, we were losing an average of N1 billion a day because it was like a leaking basket. We import the thing, and as we bring it to Nigeria, it will leak out through all the borders. Before that, we are even losing as much as N3. 7 billion a day because we would be importing the thing, as you are importing it is not enough because it was leaking out.

“So we now felt instead of this leaking basket that we were trying to manage, why don’t we try to see, so that we can at least make it profitable so that if it is sold at market price in Nigeria, even if it goes out of Nigeria, it is okay, it becomes a business opportunity. At least, the government will not be losing from the process of importing.

“But even when we now raised the price, with deregulation today, in Nigeria our price is still N161 per litre, in Senegal the price of petrol is still N549, in Cameroon, it is N449 per litre. You can see that we are still the cheapest in this sub-region.

“Why have we kept it at N161? Frankly speaking, let us face it and this is what I will tell you. One of the things that the president considered; he said if you take it to the full scale of deregulation, today, prices should have been around N183 because you all know this.

“The cost of subsidy at the pump is different from the cost of subsidy at the FX (forex) cite. At the FX cite, we are still calculating it at N391 to the dollar, that is why you can still have N161. But you know that not all of us know today that the dollar cannot be bought at N391 but it is because we are still trying to see that the government should take some of the burdens. That is why you see that it is N161. If you are taking the dollars at the market parity price, and say let us calculate the dollar at N450 per dollar, it would have been N183 per barrel.

“So today, we can say yes we have deregulated, but we can also tell you here now, we have not fully deregulated because of the concerns that the government have for Nigerians.”

“So you can see that this is a policy direction that should have been taken long ago. No wonder every government comes to that point when they realised that subsidy was not sustainable but unfortunately some of those government did not have the political will; also the time probably was not ripe and they couldn’t take it because you can see that the cost of subsidy from 2016 to 2019 was N3.6 63 trillion, an average of N916 billion per annum.”

ALSO READ:  XENOPHOBIA: South Africa Is Taking Advantage Of The Fraud In Aso-Rock To Kill And Insult Nigerians With Impunity - Fani-Kayode

“It Was A Sad Moment For Me” – Erica Writes About Her Disqualification.

ADVICE:What Nigeria can do to lift its citizens out of poverty – Bill Gates