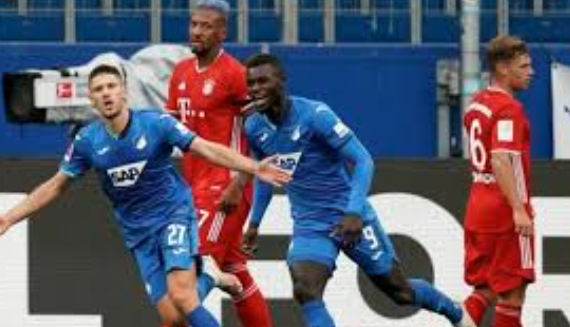 European champions Bayern Munich suffered a first defeat for 10 months when their 23-match winning run was ended by a shock 4-1 Bundesliga loss at Hoffenheim yesterday.

Hoffenheim raced into a 2-0 lead with early goals by defender Ermin Bicakcic and striker Munas Dabbur.

Although Joshua Kimmich gave Bayern a lifeline just before the break, Croatia international striker Andrej Kramaric netted a second-half goal and converted a late penalty. The shock win left Hoffenheim top of the table while defending champions Bayern are in the unusual position of seventh after two matches.

It was the first time Bayern have lost under head coach Hansi Flick in any competition since going down 2-1 to Borussia Moenchengladbach on December 7, 2019.

“Compliments to Hoffenheim, they cut out our space and gave us few chances,” said Flick, who bristled at repeated questions about his team’s tired display.

“We just couldn’t manage to take our chances or play with our usual intensity.”