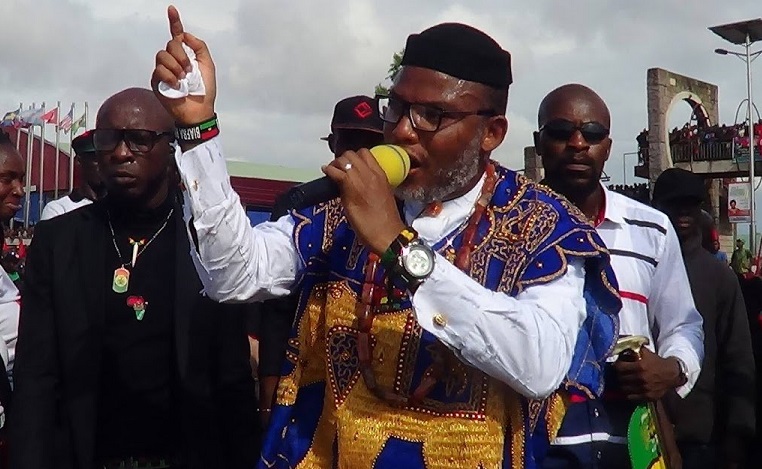 The leader of the Indigenous People Of Biafra, Nnamdi Kanu, has stated that it is not the duty of the President, the Federal Government of the governors to decide who stays or leaves Nigeria.

Kanu made the assertion on Saturday via a tweet on his official Twitter handle, noting that only a referendum by the people could determine that.

He added that whether the country would disintegrate or remain integrated should be determined by the people via a referendum.

The founder of the Eastern Security Network added that the Nigerian military did not also have the power to stop a referendum.

“Dear Nigerian Govs. It’s not your business to decide whether the people of your State should remain Nigerians or not. It’s not even the business of @NGRPresident or the @HQNigerianArmy.

“Instead, it’s the business of the PEOPLE, freely expressed through a process called REFERENDUM”, he tweeted on Saturday.

SaharaReporters had on Saturday reported that members of the House of Representatives met with the Chief of Army Staff, Lt Gen Ibrahim Attahiru, behind closed doors at the Nigerian Army Headquarters in Abuja to discuss the secessions and agitations threats going on in the country.

The lawmakers’ committee led by its Chairman, Abdul-Razaq Namdas, held the meeting with the COAS behind closed doors at about 11am.

The lawmakers raised concerns over the agitations of individuals and groups to divide the country and rising insecurity.

A source, who was privy to the discussions at the meeting, said the army chief vowed to use all powers at his disposal to maintain the unity of the country and also defend its territorial integrity.

ALSO READ:  Mere Mortals Do Not Know What Biafra Restoration Is All About — Nnamdi Kanu Goes Deeper Into History

“The lawmakers discussed two major issues with the COAS. One is the issue of insecurity across the length and breadth of the country. The other one is the rising agitations among some individuals to divide the country,” the source said.

Only last week, the army chief had promised to flush out the secessionist agitators, saying the military was coming for such agitators “who are working to divide the unity of the country.”