BREAKING: (VIDEO) The Civil War Is Still On Going! –… 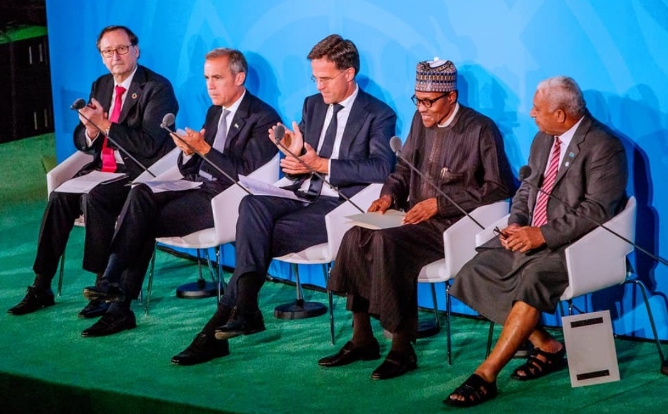 The party holds that President Buhari’s off-the-point speech on climate change, as response to direct and simple question on his plan for the youth, confirms Mr. President’s personal inability to understand and effectively communicate in English language as required by Section 318 (iii) of the 1999 Constitution (as amended).

The PDP in a statement by its National Publicity Secretary, Kola Ologbondiyan, noted that President Buhari’s failure to comprehend the question put to him and respond accordingly trashes his claims of attending education to school certificate level and possessing a WAEC certificate, and further brings to light the reasons for his inability to attach any educational certificate as required in INEC form CF001.

“The party states that it was obvious to all that because of President Buhari’s inability to understand and communicate in English language (as required by the constitution), he failed to distinguish the fact that the text already prepared for him by his handlers had no correlation with question put to him at the UN.

“Nigerians can now see why the Buhari administration has remained miserably incompetent, lacking in tact and desired capacity to manage the affairs of a nation as complex, demanding and multifarious like Nigeria.

“Moreover, it has also exposed why the Buhari Presidency overtly lacks the intellect and confidence to engage other world leaders, a situation that has led to the diminishing of the integrity of our nation in the international arena, in addition to the dearth in foreign direct investment under his watch.

“The PDP therefore cautions the Presidency over its press statement in which it poured insults on Nigerians for commenting on President Buhari’s embarrassing outing at the UN.

“Instead of insulting Nigerians, the Presidency should apologize to our citizens over the embarrassments constantly brought to our nation by President Buhari.”