FG told to release, negotiate with Nnamdi Kanu like Nelson…

CJN’s Call For Constitution Amendment On Sharia, A Threat To National Unity — CAN 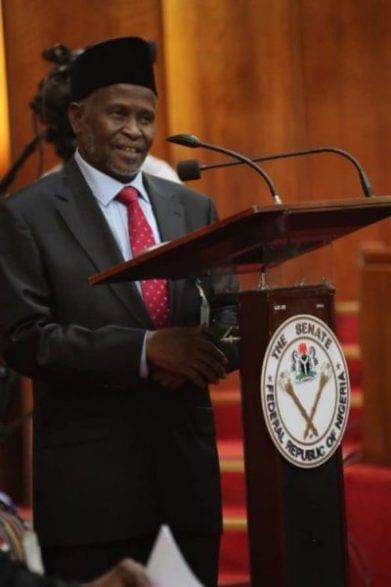 SAHARANEWS – Christian Association of Nigeria, CAN, has faulted statements attributed to the Chief Justice of Nigeria (CJN), Justice Ibrahim Tanko Muhammad, calling for Sharia to be given greater space in the constitution, saying the comments were a threat to Nigeria’s unity.

The CJN reportedly made the call last Wednesday in his keynote speech at the 20th Annual Judges Conference at the Ahmadu Bello University (ABU) which was read by the Grand Khadi of Niger State, Justice Muhammad Danjuma.

The top Jurist also urged the academics to champion the cause of redesigning the methods of teaching Shari’a law; discard English as the language of instruction in Shari’a law and for a separate faculty dedicated to Shar’ia be established.

Reacting in a statement on Saturday by Evang. Kwamkur Vondip, CAN’s National Director of Legal and Public Affairs, the umbrella Christian body said it viewed the appeals by the CJN as reprehensible, reckless and insensitive coming from a public officer.

The statement reads in part, “It is one more glaring case in our recent history where public officers, rather than see themselves in privileged positions to discharge responsibilities that promote national cohesion, dialogue, and understanding, remove suspicion and project Nigeria’s leadership, have instead turned around to be local and humdrum in their dispositions toward other parts of the country.

ALSO READ:  JUST IN: "Declare Me Winner And Leave Buhari & APC For Me To Handle" - Atiku Responds To Tribunal, Insists He Defeated Buhari By 1.6million Votes

“No one can begrudge the CJN for peacefully practising his faith. But to seek to transform it into having greater space in our constitution for only one religion is the height official immodesty. Clearly, this looks like the path to making Islam a state religion.
“The Christian Association of Nigeria (CAN) notes that Nigerians are well aware that there are sections of the constitution which allow the implementation of Islamic Personal Law.

“Hon Justice Tanko is obviously aware that there is a constitutional barrier to his dangerous idea. Section 10 of the constitution specifies: ‘The Government of the Federation or of a State shall not adopt any religion as State Religion.’

“The very first provision of the constitution states clearly in Section 1 (1): ‘This Constitution is supreme and its provisions shall have binding force on all authorities and persons through the Federal Republic of Nigeria,’

“So, he throws in what he believes is the solution: Amend the Constitution. And to do that, he is not talking of a national consensus. No.

“He simply states, ‘As we all know, there are sections of the constitution that allow the implementation of Islamic personal law and apart from that, we cannot do more. However, we have the number to amend the constitution to suit our own position as Muslims.’

“If the less educated, the unenlightened, the mischievous and the politically extreme can tinker with such permutations, certainly not a man of the learning, age, experience, exposure and publicly centred personality as the Chief Justice of Nigeria.

“Does his position speak positively of a man who can still be trusted to hold the judiciary together as belonging to one nation with one people of various opinions, religious convictions and political persuasions?

“Hon Justice Ibrahim Tanko Muhammad has ushered in a potentially volcanic and vulturous debate. He and those supporting and prodding him on expect to receive feedback. Here is one: it is dangerous; it is condemnable; it is impractical; it is unwise, it is highly divisive, and unnecessarily so.”

CAN advise the CJN to show greater concern to the elements that will keep the country peaceful, serene, united, steadily growing and, with inclusive governance

“He (CJN) should focus on how to bring greater reforms that will bring justice closer to the people devoid of technicalities, and the ridiculous complications we all saw during the sitting of tribunals, appeal panels and even the Supreme Court over which he presides,” it counselled.

The umbrella Christian body urged Nigerians to rise with one voice and condemn the CJN’s call.

It noted that citizens want to see safer highways, highly improved electricity supply, failure-proof roads, affordable and available health care and housing, jobs and empowerment for our youth and women as well freedom to ventilate their opinions.

“The people should tell their national and state legislatures to disregard it. We instead call for national unity based on the current constitutional provisions,” the group of churches said.

CAN also be called for the implementation of the 2014 National Conference Report, saying it will give a balanced and proper expression to all parts of the country in how they wish to live and be governed in the 21st Century.