It Is Wrong To Think National Assembly Members Are Overpaid… 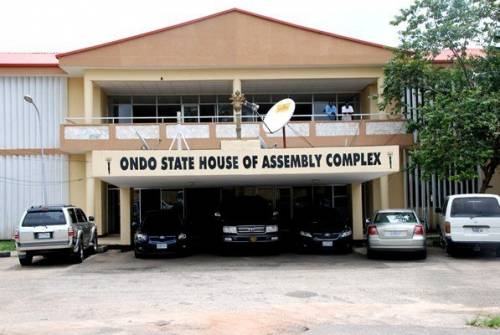 SAHARANEWS – Members of the Ondo State House of Assembly lied that a big snake appeared at the chamber of the parliament during their sitting last week, SaharaReporters has learnt.

Facts emerged over the weekend that there was no snake appearance at the Assembly complex despite the media about the falsehood.

Last week Wednesday, there were reports that a snake dropped from the ceiling and fell while the legislators were preparing for the plenary.

The lawmaker, through their aides, went as far as circulating a picture of a big python, climbing down the ceiling to boost their fiction.

But the picture was fake, according to an image reverse check done by SaharaNews

The incident made the lawmakers to adjourn sitting indefinitely last week Thursday.

Bamidele Oloyelogun, Speaker of the Ondo Assembly, lied that ‘a life snake’ dropped from the ceiling while members were planning to hold plenary.

He added that the incident forced lawmakers to abandon the sitting in the Assembly and called for an indefinite recess.

“For a live snake to come down, we thank God that the snake did not bite any of our honourable colleagues,” he  had said.

Mr Gbenga Omole, the Chairman House Committee on Information, claimed that the “snake chased the lawmakers away from the Assembly as plenary sittings could not hold”.

ALSO READ:  "If They Became Busy, They Will Abandon Nnamdi Kanu And Biafra Agitation Will Die A Natural Death" - Lai Mohammed

However, It was authoritatively gathered that the Ondo Assembly lawmakers cooked up the lies at a caucus meeting of some selected lawmakers.

Findings revealed that a principal officer and top lawmaker at theAssembly sold the idea (lies) to other members, who immediately bought it during their meeting.

The main reason for orchestrating the lies by the disgruntled lawmakers was to call the attention of Governor Rotimi Akeredolu to the dilapidated structures of the Assembly complex.

One of the lawmakers, who confided in our correspondent, revealed that the story about the appearance of a snake in the Assembly was a complete falsehood cooked by the parliamentarians.

The source said, “The main truth is that no big snake appeared from the ceiling at the chamber of the Assembly. It is just a cooked up story that we all planted for you journalists and interestingly the media fell for it.

“But why I am surprised is that we did not expect that the story could go viral immediately. We only called some selected reporters who are good friends of the Assembly to report this for us.

“And the main issue is that the Assembly complex is becoming an eyesore with many of the structures already dilapidated and ceilings caved in. The structure is becoming  embarrassing to us.

“Even at our plenary, we have called the attention of the governor to the decaying structure which is not befitting but no convincing reply has been sent to us.

“We have been asking for autonomy over our finance. If we have our own autonomy, we would have carried out the repair and renovations at the Assembly ourselves.

“So, some of us met and concluded that we have to find a way to get out of this mess. It is a mess because we cannot continue to sit inside that dilapidated chamber and offices as lawmakers.

“When we met, some ideas were suggested but we all agreed to the particular lie about the snakes which we feel would attract the attention of the public.

“We agreed with the Speaker that in order to get the attention of Mr. governor, we would  call the press that a big snake appeared during our plenary as a result of the decaying structures and ceiling.”

SaharaNews observed that some section of ceilings in the chamber are caving in.

The Assembly complex has been neglected for man years and left in deplorable condition with many of its buildings decaying and ceilings caved in.

Many of the wooden furniture in the chamber, which include the doors and tables, has been eaten up by termites as a result of lack of maintenance.

Sources at the Assembly confirmed to Sahara Reporters that both the past and successive governments had failed to intervene.

Akeredolu on Saturday night visited the Assembly and expressed disappointment with the lies orchestrated by the lawmakers.

The governor said the lawmakers had only made the attempt to blackmail the state and  ridicule his government.

The angry governor, who was in the company of his Chief of Staff, Mr Olugbenga Ale, said his “government would not condone any act of blackmail”.

Meanwhile, Femi Emodamori, a lawyer, has lampooned the disgruntled lawmakers of the Assembly for peddling lies that a ‘mysterious snake’ appeared at the hallowed chamber of the parliament house.

Emodamori, in a statement obtained by our reporters, said the Speaker (Oloyelogun) of the Ondo State Assembly should resign his position and tender an apology for bringing ridicule and shame on the state with the fabricated story.

He said, “The House of Assembly’s  snake invasion falsehood with the incalculable harm it has caused the reputation of Ondo State and entire Nigeria, is disgraceful, demeaning, dangerous and demonic.

“For those who called themselves honourable to have orchestrated the false mystery snake story as a basis to suspend the activities of an entire arm government indefinitely, depicts the tragedy of a nation in the hand of morally decadent supposed political leaders.”