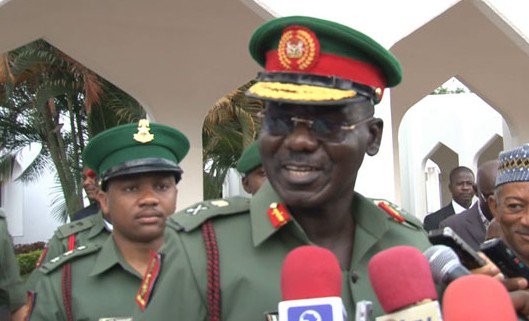 SAHARANEWS – The Nigerian Army has condemned a statement by the presidential candidate of the Peoples Democratic Party (PDP), Alhaji Atiku Abubakar asking the Army to disregard President Muhammadu Buhari’s order to “deal ruthlessly” with ballot box snatchers in the rescheduled general elections.

Responding to Atiku’s Statement, the Chief of Army Staff, Lt. General, Tukur Buratai said that the statement was unfortunate coming from someone that has been in the highest level of government before.

Buratai said the military in general is meant to obey the orders of the Commander-In-Chief of the Nigerian Armed Forces to the latter.

He, however, asked the former vice president not only to withdraw the statement but to also apologise for attempting to invite the Army against what he termed as “constituted authority” it was meant to fully obey.

Buratai warned politicians and their supporters against testing the will of the army, insisting that those found to have violated the law, will be treated in line with President Buhari’s directive.

He also cautioned the officers against playing partisan roles, saying those with such feelings has up to Friday, February 22 to resign.

ALSO READ:  CJN: A Look at the charges against Onnoghen

2019 POLLS: This Is What Nigerian Army Were Caught On Camera Doing – see photos