NASS Invitation: Buhari Is Afraid, Has Nothing To Tell… 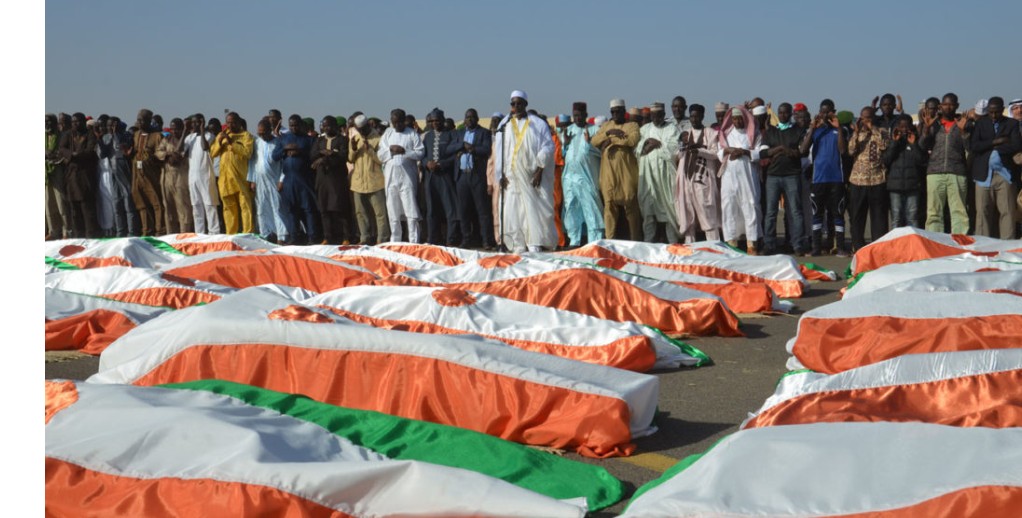 SAHARANEWS – Niger on Friday staged ceremonies for 71 troops killed in the biggest jihadist assault in the country’s history.

Body bags draped in the national flag were set out on the tarmac of an airforce base near the capital Niamey, where President Mahamadou Issoufou paid tribute.

“Your death is glorious — to die with weapons in your hand is one of the best ways to die,” he said.

Tuesday, the day of the attack, was “a terrible day, a black Tuesday,” he added. “It was a terrible challenge for our army.”

Seventy-one troops were killed, 12 were wounded and “others” are missing, according to the defence ministry, after hundreds of jihadists attacked a base at Inates, in the western region of Tillaberi.

It was the bloodiest attack by Islamists in Niger’s history and one of the deadliest across the Sahel, where a jihadist insurgency erupted in Mali in 2012 before spreading to its neighbours.

Issoufou decorated each soldier with the Cross of Courage. Their bodies will be buried at a cemetery at the base called the Square of the Martyrs.

Around 200 people, mainly relatives and friends of the dead, watched the ceremony from a hangar.

“This is my husband who has died. I no longer want to live,” a woman told an AFP journalist.

The government has declared three days of national mourning and urged the public to join “collective prayers” in mosques across the country on Friday.

It has also scrapped festivities to mark the 61st anniversary of the country’s independence, scheduled for December 18 in the regional hub of Tillaberi city.

“I lost a cousin in this massacre. I have prayed ceaselessly for his soul since yesterday. At 2pm, we will go as a family to join prayers in the local mosque, to pray again,” said Hadjia Amina Midoun, a Niamey resident.

In the last four months, more than 230 soldiers in Niger, Mali and Burkina Faso have lost their lives, in addition to 13 French troops killed in a helicopter collision while hunting jihadists in northern Mali.

Since 2012, thousands of civilians have died and more than a million have fled their homes.

Analysts note an escalation in the jihadists’ operational tactics, which seem to have become bolder and more complex in recent months.

Instead of hit-and-run raids by a small group of Kalashnikov-armed guerrillas, the jihadists are now carrying out operations that involve hundreds of fighters, armed with mortars and suicide attack vehicles.

BUHARI’S FREE VISA POLICY: Execution of the series of agenda of Islamisation – Fani-Kayode