BREAKING: Rivers Election, Amaechi Is On Own, “APC Not… 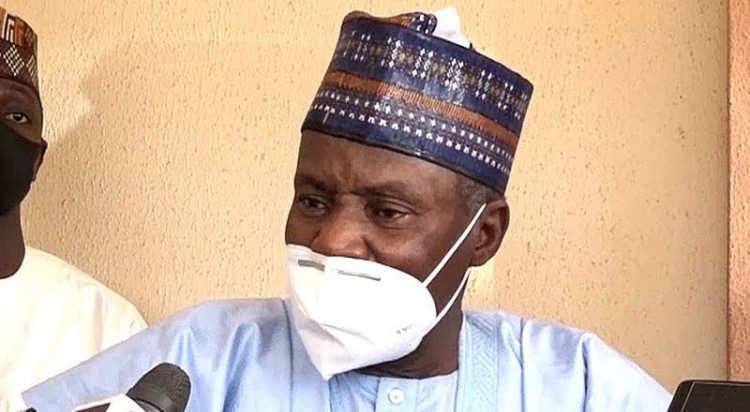 Nigerians have taken to social media to lambast the Minister of Defence, Bashir Salihi Magashi, over his comment that Nigerians should stop being cowards and stop running away from armed bandits.

Magashi, while speaking on Wednesday on the sidelines of the screening of the service chiefs nominees by the House of Representatives’ Special Committee, said bandits would not be having a field day if Nigerians stood up to them whenever they attacked.

He said: “It is the responsibility of everybody to keep alert and find safety when necessary.

“We shouldn’t be cowards. Sometimes the bandits only come with about three rounds of ammunition and when they fire shots, everybody will rush. In our younger days, we stand to fight any aggression coming to us.

“I don’t know why people are running away from minor, minor things like that. We should stand and face them. Let these people know that even the villagers they have the competence…”

He, however, said Nigeria should not have a law allowing citizens to bear arms to defend themselves.

Several Nigerians have criticised the stance of the Defence Minister on Twitter and other social media platforms.

Twitter user, @fankdonga_, described the statement of the defence minister as trouble, saying, “When a serving minister of defence who has 24-hour protection by loads of armed officers calls poor unarmed citizens cowards for not fighting armed bandits, you know there is trouble. #ITweetInPeace.”

Another user, @Ameena_Usman_, said there is so much incompetence in the security system. She wrote, “Imagine the level of incompetence in the system. The worst thing that has happened to Nigeria is the belief that once you’ve served in the military you have knowledge about security. Some of these guys are typical olodo (dullards). Nothing dey their head.”

Also, @peter_posh1 described the defence minister and other security personnel as incompetent. “When you have an incompetent old hack handling the security of lives and properties, what more do you expect. Tell me how this country will move forward with people like this still in government,” he said.

@OgbeniDipo said, “The Minister of Defence should not be saying this. Citizens with bare hands should not be cowards and face terrorists with AK47 and RPGs? Just do your job or resign.”

@Madam_Karen_ tweeted, “I still can’t believe Nigerian Minister of Defence told reporters that citizens should not be cowards & defend themselves against terrorists armed with RPGs & sophisticated weapons.”

UK-based Nigerian doctor, @DrOlufunmilayo said, “The Minister of Defence said Nigerians should defend themselves against bandits. Yet same man is against the ownership of guns by private citizens. So please, how do we defend ourselves? With a bread knife and korkor shoe (shoes)?”

@NotJustSalmanPR also said, “How can the Minister of Defence say Nigerians should defend themselves against bandits without legalising guns for us? Is it a kitchen knife or laptop we will use to block bullets?”

But @Naijamarkett said the minister was simply telling Nigerians to secretly arm themselves.

He wrote, “He is simply saying the truth. To break it down, let me ask, who gave the bandits right to carry weapons? No one did. He is simply telling us to carry our weapons in private. Every household should get a gun for themselves.”

Twitter user, @itsjustkelvyn, asked if Nigerian government was useful for anything based on the statement made by the minister.

“We provide our own jobs, power, water, health and now the minister of defence asks taxpayers to provide our own security. So, what exactly is the use of the Nigerian government?”

@morris_monye wrote, “Did the Minister of Defence just say that Nigerians are cowards and they should defend themselves? Or was he quoted out of context? Anyway, I have some of the most vicious dogs ever in my compound so bring it on. Defence Minister has abdicated his role of defending Nigerians.”

@YarKafanchan wrote, “Nigeria’s Minister of Defence is an utter disgrace. After failing to protect Nigerians while enriching their deep pockets, this character is telling helpless villagers in a rapidly failing Nigerian state that they are cowardly for running from armed terrorists.”

@youths2023 said the comment made by the minister of defence simply showed the unwillingness of the government to tackle insecurity in the country.

“The Minister of Defence said that the bandits come with few bullets and yet the security can’t attack them. This is a confirmation that the governments don’t have the will to attack their misguided brothers but they’re using helicopters and machine guns in living areas in Orlu,” the Twitter user said.

Another Twitter user, @osee80, opined, “Minister of Defence Maj. Gen. Magashi (rtd) telling locals to stay and fight back when ‘bandits’ attack their communities. Why is it so sad for all this APC failures to resign in shame? But they are quick to run after peaceful #EndSARS.”

EXCLUSIVE: Zamfara To Spend N200million On ‘Repentant’ Bandits In 2021

BREAKING:Tension As Nigerian Military Conducts Air Strikes In Orlu In Search Of ESN