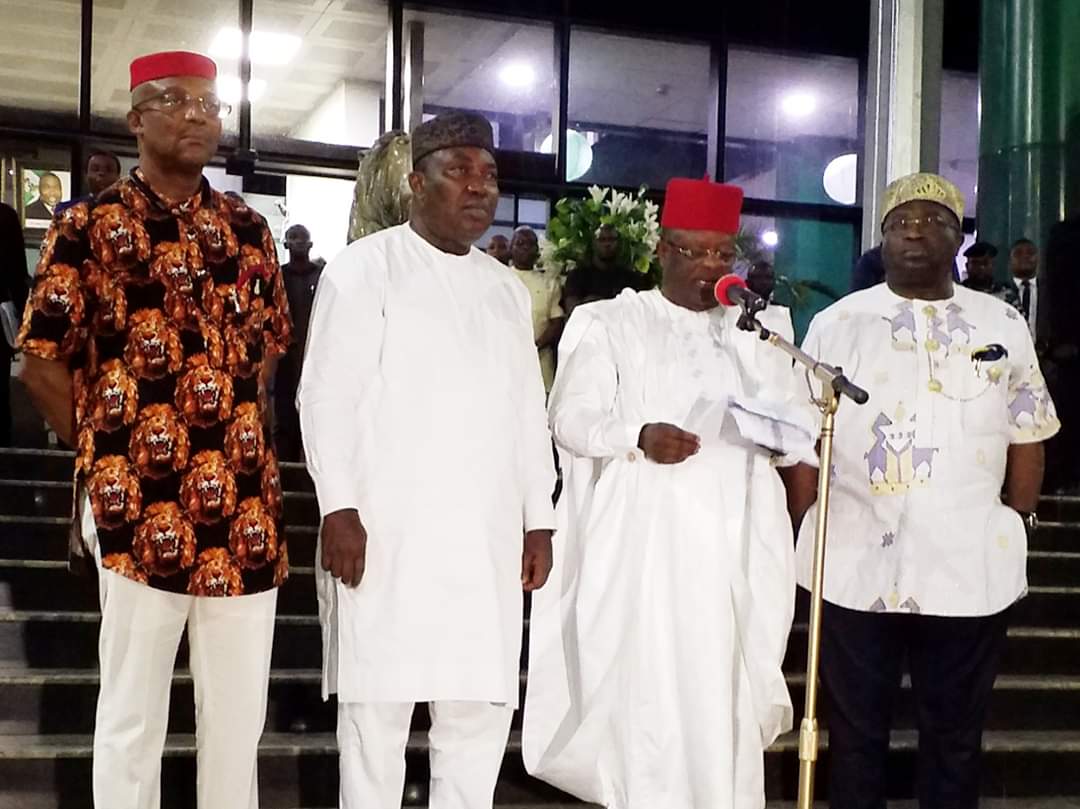 SAHARANEWS – Following a closed-door meeting held today by the South East Governors at the Government House, Enugu, Governor David Nweze Umahi has disclosed their plan to forward a bill to South East State Houses of Assembly to enact a law to back-up the South East Regional Security Programme.

Speaking with journalists after the meeting which lasted over five hours, the Chairman of the South East Governors’ Forum and Governor of Ebonyi State, Engr. David Umahi, stated that the arrangement with the States Houses of Assembly will arrive at a name for the regional security outfit.

Engr. Umahi, who maintained that the South East Governors had earlier formed their joint regional security on July 28, 2019 and consequently inaugurated the committee on August 31, added that the Forum had written the Federal Government concerning the security outfit.

According to him, “at an appropriate time we shall be inviting the Federal Government to note the details of our Joint Security Programme”.

The governors assured the people of the South East zone that “we have our State Vigilante and the Forest Guards in all the South East States, who work with the security agencies daily in our various communities for protection of lives and property”.

They reassured the people that “the protection of their lives and property is paramount to us and we are committed to just doing that”.

On ongoing rehabilitation of the Akanu Ibiam International Airport, Enugu, the South East governors, while noting the quality and speed of work by the contractor, PW Nig. Ltd, expressed satisfaction with the progress so far made and assurances of integrated safety and landing facilities, fencing and drainage system incorporated in the package.

The Forum, therefore, “commended President Muhammadu Buhari for his prompt response in full release of special funding for the project”.

The Forum also commended Governor Ifeanyi Ugwuanyi of Enugu State “for making more land available and his commitment in the overall success of the project”, as well as the Minister of Aviation, Senator Hadi Sirika and the Works Committee Chairman on the project, Sir. Engr. Chris Okoye and his team, for their commitment and constant supervision and monitoring of the project.

The governors assured the people that President Buhari, the Aviation Minister, the President’s Chief of Staff and all other stakeholders are committed to the re-opening of the Enugu airport by March 31, 2020, saying: “All inconveniences are regretted”.

The Forum equally applauded the federal government on the speedy and quality work on the ongoing Enugu-Port Harcourt federal highway, with reservations on a number of sections yet to be attended to, “especially the Abia-PH axis being handled by a Chinese Company”.

On the 2nd Niger Bridge, after a brief on the progress of work from the Governor of Anambra State, Chief Willie Obiano, represented by his deputy, Dr. Nkem Okeke, the Forum and other stakeholders who were present at the meeting commended President Buhari, the works minister, the President’s Chief of Staff and the Managing Director of National Social Insurance Authority (NSIA), Mr. Uche Orji, for making the all-important project a reality.

“With the level of funding by Mr. President, we are confident that this project shall be completed in his tenure”, the Forum declared.

They thanked members of Imeobi Ohanaeze Ndi Igbo for visiting them during the meeting, assuring them that their useful advice was noted with a pledge to work with them for the benefit of the people of the zone.

JUST IN: “Stay Away From Home For Now” – Igbo Group Begs Nnamdi Kanu Not Show Up At Parent’s Burial