We’re not against rice importation, says FG after…

Abia APC Chairman Breaks Silence, Reveals How He Was… 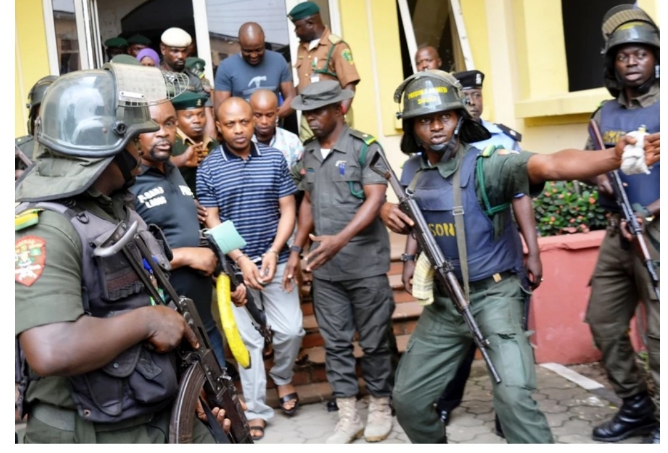 SAHARANEWS – The police officers gunned to death by soldiers along the Ibi-Jalingo Road in Taraba on Tuesday, August 6, 2019, were some of the finest intelligence officers around, according to Vincent Maxwell,an Assistant Superintendent of Police.

Troops of ‘93 Battalion Nigerian Army Takum’were responding to a distress call to rescue a kidnapped victim when they clashed with a police team speeding along in a bus.

According to the army’s version of the events the police team refused to stop when they were flagged down at three different army checkpoints.

Col-Sagir-Musa, army spokesperson, says the officers were killed in error.

What followed was a fierce gun duel. The police team reportedly fired at the troops who returned fire in self-defense.

By the time the dust settled and gunpowder thinned out, “three policemen, one inspector, two sergeants, and one civilian had died as a result of gunshot injuries sustained in the attack while others sustained serious gunshot wounds”, says police spokesperson Frank Mba.

The arrested kidnap suspect who was traveling with the police in handcuffs, was also set free and is now on the run, police say.

Frank Mba, police spokesperson, says his men were brutally shot at by soldiers.

The army says they mistook the policemen for kidnappers.

A string of high profile cases

ASP Maxwell says some of the fallen police personnel were among the best on the Inspector General of Police’s Intelligence Response Team (IRT).

The names of the slain police officers have been given as Sgt Usman Danzumi, Insp Mark Edialeand Sgt Dahiru Musa.

The IRT is a specialist police unit tasked with hounding kidnappers, terrorists and robbers through the deployment of sophisticated hard and soft ware.

The team has also cracked a couple of cases regular police teams are ill suited for.

The deceased officers participated in several high profile operations including the arrest of 22 Boko Haram terrorists responsible for the 2014 kidnapping of the Chibok schoolgirlsin Borno; the rescue of district head of Daura, Magajin Garinin Kano State; and the celebrated 2017 arrest of Chukwudumeme Onwuamadike (aka Evans)reputed to be one of Nigeria’s most notorious kidnap kingpins.

The fallen police officers were also involved in the arrest of Umar Abdulmalik,a Boko Haram commander suspected to be the mastermind of the bombings in Nyanya and Kuje areas of Abuja in 2015.

Abba Kyari,head of the IRT adds that the slain police officers were part of the team that secured the release of Musa Umar,father-in-law of President Muhammadu Buhari’saide de camp (ADC), who was kidnapped in May of 2019.

“They similarly participated in the arrest of Umar Abdulmalik, overall Boko Haram Commander of North Central Nigeria and several of his group members,” Kyari says.

“They arrested the kidnappers of two American and two Canadian citizens in Kaduna State and most recently, they took part in the rescue of Magajin Garin Daura in Kano State during which 13 suspects who carried out the abduction were arrested in Kano.

Evans appears in court during his trial for kidnapping and murder (Fionanews.ng)

The fatal shooting involving soldiers and police this week, once again brings to the fore the unhealthy rivalry and ego among Nigeria’s security forces.

The police and army have agreed to set up a Joint Investigation Panel to unravel the circumstances that led to the gun duel.

The panel will be headed by the Deputy Inspector General of Police in charge of the Criminal Investigation Department(CID), Mike Ogbizi.