My Crime Was Wearing Biafra T-shirts, Not Having Biafra… 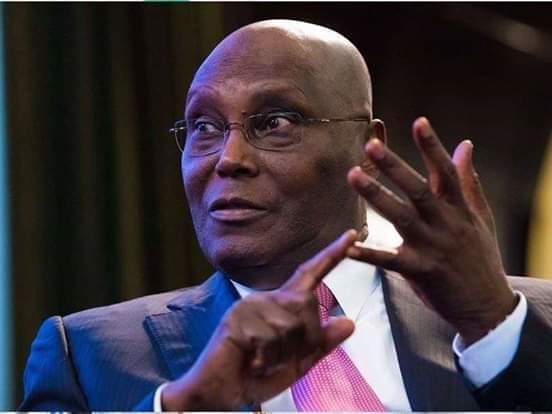 The presidential candidate of the Peoples Democratic Party, Alhaji Atiku Abubakar, on Monday, regretted that soldiers were killed on the day the nation’s service chiefs were attending the inauguration of President Muhammadu Buhari’s re-election campaign, “Next Level.”

He said it was possible that the killing could have been avoided if the service chiefs had been allowed to concentrate on their jobs.This was contained in a statement made available to journalists in Abuja by the Atiku Presidential Campaign Organisation.

The organisation recalled that Atiku had asked his friends and associates to present the gifts they would have given him on his birthday to the families of the slain soldiers.

It said it was therefore wrong for the All Progressives Congress to cast aspersions on the presidential candidate on the day of his birthday and turbaning as Waziri Adamawa. It said the APC’s statement which accused the former Vice President Atiku Abubakar of “selfishness and mercantilism” was curious as Atiku dedicated his birthday, not to himself, but to celebrating the 100 or so heroes of the 157 Taskforce Battalion of the Nigerian Army who lost their lives to Boko Haram at Metele in Borno State.


It added that the fact that Atiku asked for anyone who wished to give him birthday gifts to instead endow such on the families of the slain heroes is the opposite of selfishness.  The statement read, “Ironically, the All Progressives Congress that is now accusing Atiku Abubakar, has not deemed it fit to pay tribute to these gallant men who gave their lives in order to secure the lives of others.   “As a party, they have not issued even one statement condoling with the slain or their families, neither have they offered any tangible support to the families of these fallen heroes. Yet, they are accusing the Waziri, who has shown commitment to honouring these heroes, of selfishness.

“As a matter of fact, we now know through Reuters report, that these real Nigerian heroes were killed on November 18, 2018, which was the exact time that the candidate of the APC, Muhammadu Buhari, invited the service chiefs to attend the launch of the plagiarised #NextLevel launch at the banquet hall of the Presidential Villa.

“The nation can only wonder if the Metele massacre could have been avoided if the APC and President Buhari had allowed the service chiefs to focus on their core duties, rather than on his ill-fated re-election campaign.”

The organisation commended the service chiefs “for beating a hasty retreat from the event as soon as they discovered that President Buhari was trying to hoodwink them.”

It said while it took Atiku only a few hours to respond to the incident and express support, it took Buhari a week to express “shock”.  It added, “We, therefore, wonder who is truly ‘selfish’.


“It is left to Nigerians to compare and contrast who is a leader and who is a follower based on the conduct of these two parties.

“In any case, we would like to inform the APC of Waziri Atiku Abubakar’s call for financial support from well-meaning individuals and institutions for the survivors of the Metele massacre, and indeed for all who paid the supreme sacrifice in the frontlines for us to be safe.”

JUST IN : I challenge you to a live debate – Atiku to PMB