2023: I Have No Interest In Tinubu’s Presidential… 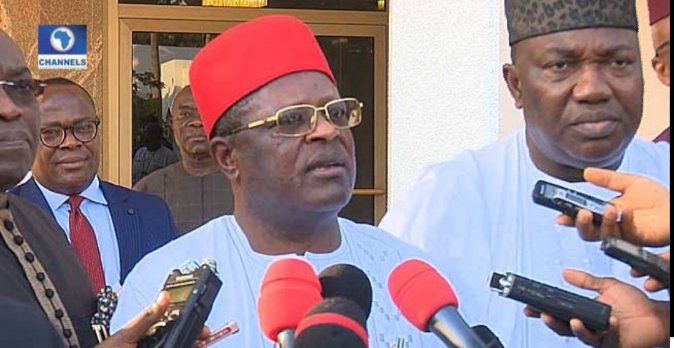 SAHARANEWS – The South East Governors on Saturday denied any complicity in the Operation Python Dance, the Nigerian Army started in the South East zone that allegedly killed members of the proscribed Indigenous People of Biafra at Afara-Ukwu, Umuahia, Abia State, home of the leader of the group, Nnamdi Kanu on September 2017.

The IPOB had vowed to attack the governors and Igbo leaders anywhere outside the country, citing their conspiracy with the Federal Government to killed their members during the Operation Python Dance by the Army.

Briefing newsmen after the meeting of the governors with some Igbo stakeholders that was attended by Minister of Aviation, Hadi Sirika, the Chairman of South East Governors and Ebonyi State Governor, David Umahi, explained that the governors never invited the military to the South East for the Operation Python Dance.

ALSO READ:  Nigeria Will Integrate ‘Repentant’ Bandits Into Society Even Though They Are Criminals, Committed Atrocities – Buhari’s Minister

BREAKING: S’East Govs Ban Movement Of Herdsmen From State To State, Community To community, Use Of AK-47, Machetes By Herders In The Whole Of South East (Full Details of Issues Raised By Govs)