FLASH BACK : Remembering the Biafran legend who made GEJ the president. 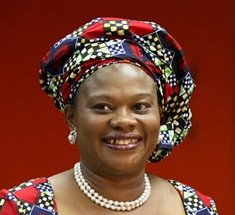 Remembering professor Dora Akunyili, what a great and fearless woman, she made godluck Jonathan who was the acting president then, to be president.

When the Aso rock cabals were busy shopping for an impostor to impersonate the dead yaradua, so to remain power , she challenged the cabals over their secrecy  in hiding the death of shehu yaradua who was the president then.


As the information minister then, she announced to the world that the president is dead, that was how Jonathan became the full president. Now the yorubas couldn’t produced their own Dora Akunyili that could boldly tell the world the buhari is dead,  for  osibanjo take over, instead they all cowardly kept silent and watched the cabals brought in an idiot  from Sudan jubril to impersonate the late Buhari. “

BUHARI’S DOUBLE : l will get to the root of this – President Omar Al-bas assures UN