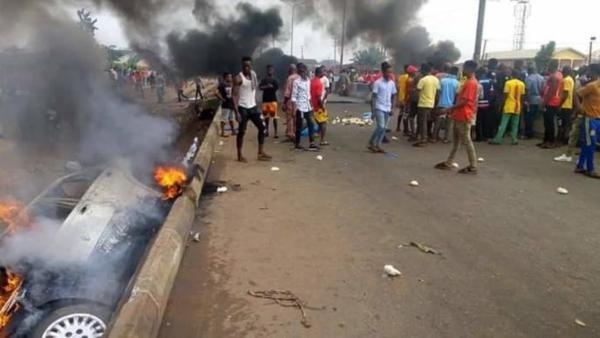 The ugly accident that occurred by Uselu Shell in Egor Local Government Area of Edo State, provoked angry youths from various villages, who blocked and staged bonfire on the road.

It was gathered that businesses around the area were shutdown while commuters who were caught in the web were stranded for hours.

Pedestrians were forced to trek a long distance to their destinations as a result of the gridlock despite police presence.

Although, the particulars of the BMW car could not be verified.

An witness told DAILY POST that the children were sent on an errand by their mother who resides in the area when tragedy struck while the driver of the vehicle took to his heels.

“Uselu-Lagos Express road is on a lockdown as a BMW car just killed four children. Community youths have taken over the major road.

ALSO READ:  XENOPHOBIA: FG Reacts To South Africa's Closure Of Embassy, Says That Buhari’s Govt Must Continue To Press For Compensation On The Attacks And Destruction Of Nigerians Properties

“This is a sad news, may their souls rest in perfect peace. Amen.

“About six policemen are on ground. But, that is not enough to calm the irate crowd here.

“That road is too busy. It is even difficult for an adult to cross the road, let alone your own children,” the source said.

When Contacted, Edo State Sector Commander, Federal Road Safety Corps, Mr Anthony Okoh, told saharaNews that his people were still at the scene of the accident.

“My men/officers are still there, so I will have to wait for them to come back with the report of what happened before I can speak on that,” he said.