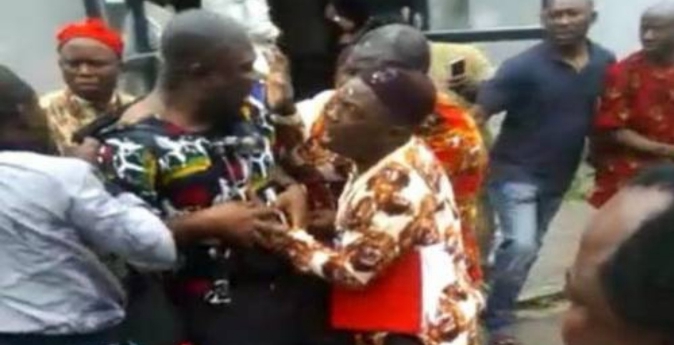 SAHARANEWS – Federal Government is not too pleased with response of the Nuremberg police after the incident in Germany and has since sent dispatches to mission houses in the country reminding them that Nigeria intends to take very seriously, international charters that protect visiting office holders on foreign soil.

According to a news report earlier in the week, the Nigerian embassy in Germany mounted pressure on the German federal authorities to bring the attackers to justice following the initial reluctance of the state police to investigate the assault which was captured on video. The police had dismissed the episode as mere agitations and protest by citizens against its country’s political office holders.

But according to Yusuf Tuggar, Nigeria’s Ambassador to Germany, the European country has an obligation to foreign government dignitaries visiting the country.

Under section 102 (1), chapter 3, of the German Criminal Code, attacks against organs and representatives of foreign states are punishable with fines and imprisonment.

It states, “(1) Whosoever commits an attack against the life or limb of a foreign head of state, member of a foreign government, the head of a foreign diplomatic mission who is accredited in the federal territory while the victim is in Germany in his official capacity shall be liable to imprisonment not exceeding five years or a fine, in especially serious cases to imprisonment of not less than one year.

ALSO READ:  Why I want to visit Nnamdi Kanu in custody — Ifeanyi Ubah

“(2) In addition to a sentence of imprisonment of at least six months, the court may order the loss of the ability to hold public office to vote and be elected in public elections (section 45(2) and (5).”

But the Germans do not consider Ekweremadu’s case as qualifying as assault.