Kenyan father sues son to court, demand 20% of his monthly…

Why I like women with big breasts and curves — Nollywood… 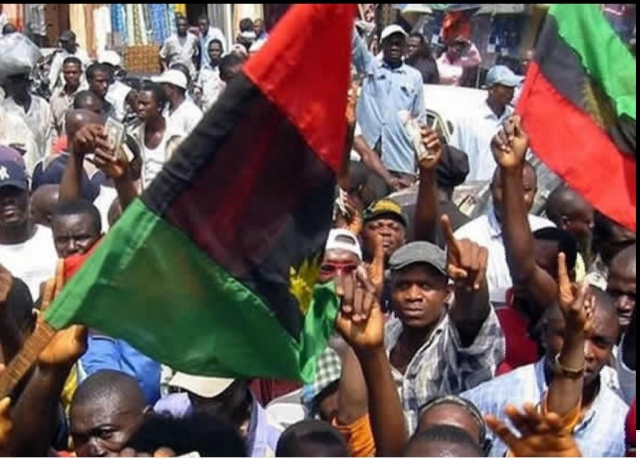 SAHARANEWS – We the Indigenous People of Biafra (IPOB) worldwide and it’s leadership condemn in the strongest possible terms the deplorable attack on protesting IPOB family members in Pretoria during the insensitive visit of the Sudanese impostor Jubril Al-Sudani who is being fraudulently paraded as the deceased Nigerian President Major General Muhammadu Buhari. Not even during the worst excesses of apartheid in South Africa were such horrific scenes of unprovoked police brutality recorded as what obtained during this meeting of Jubril and Cyril Ramaphosa.

What was witnessed in South Africa is a confrontational broadening of the theatre of IPOB agitation to other African countries. It’s simply a case of Cyril Ramaphosa resorting to the use of force against protesting IPOB family members, who are legitimately demanding for the DNA of Jubril Al-Sudani, as a way of endearing himself to the ruling Fulani cabal in order to maintain South Africa’s trading advantage over Nigeria, especially in the area of subsidised oil imports.

We wonder why President Cyril Ramaphosa who himself was a victim of state police brutality would order black South African Police officers to fire live rounds at unarmed and peaceful protesters. It appears Abba Kyari led Fulani cabal who are remoting the activities of Jubril have successfully exported their unique brand of state barbarism to South Africa. IPOB would like to remind President Cyril Ramaphosa that it was Biafrans that offered refuge to Nelson Mandela in the early ’60s, not these same Fulanis now instigating them against Biafra agitators in South Africa.

It’s clearly imperative that we notify South Africa government and her collaborators especially Nigeria government headed by Fulani terror groups in Abuja that IPOB will not capitulate or surrender in this quest for Biafra freedom, the same way ANC which Cyril Ramaphosa is now the leader, never capitulated against apartheid. We are confident that a more civilised and independent South African judiciary will ensure that justice is served in this matter.

Wherever and to whichever country Abba Kyari decides to send Jubril Al-Sudani, there will be IPOB reception party waiting to conduct a DNA test on him. They will never know peace until they accept the inevitability of the reemergence of Biafra