XENOPHOBIA: “South Africans Have The Right To Conduct…

We are not aware of Miyetti Allah vigilante in Imo State —… 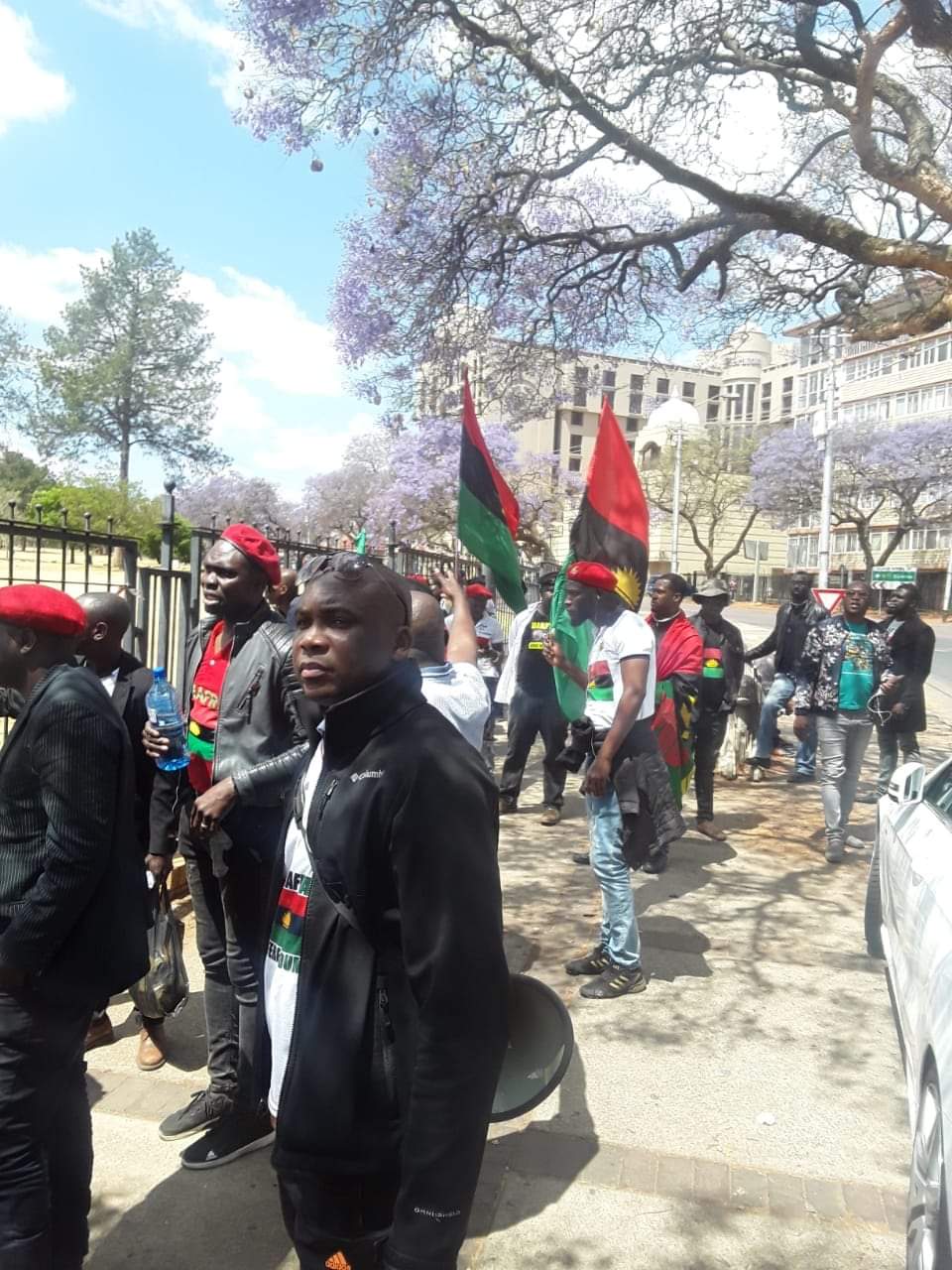 Nigeria’s High Commissioner to South Africa has been fingered as the architect of the mass-shooting of members of the Indigenous People Of Biafra during a town hall meeting attended by Nigeria’s president, Muhammadu Buhari in South Africa on Thursday October 3, 2019.
Eye witness reports gathered by Family Writers Press confirmed that dozens of IPOB members were wounded and one person arrested, as the activists protested against the reported impersonation of Nigeria president, Muhammadu Buhari by one Sudanese ‘Jubril Al-Sudani’, as well as the persistent extrajudicial killings and incarceration of innocent people across Nigeria.

The protest which was largely peaceful quickly spiraled into chaos as Nigeria ambassador approached South African government and security officials and solicited for the use of brute force to stop the protesters.

“We were doing our peaceful thing, the South African Police they came in, they tried to listen to us concerning what is going on regarding Jubril the imposter, because we’re telling them that the man there is not Buhari and we divided ourselves into two parts because we used the other entrance and another entrance so that we can be able to penetrate in,” IPOB activist who participated in the protest narrated.

“We penetrated in, then while we were doing our normal thing, there is no problem, everything was going well, everything was moving fine until the High Commissioner came down and tried to tell the Police to shoot us, why must they listen to what we’re talking. When they tried to shoot us, one of our coordinator rushed to hold him.

While he was rushing him to hold him, they started shooting us rubber bullet gun. Many of our members got injury, many of our members they shot to them at the leg, many of them broke their legs. We have their names. That is what happened. At the end, we took some of our members to hospital, the one in Police station we went to visit him,” he said.

Meanwhile, Mazi Innocent Aliam, coordinator of IPOB family in Western in Western Cape who also participated in the protest gave his own account of the pathetic episode.

“When we arrived at the venue, there was a lot of security personnel including about five DSS officers. We first cooperated with the Police and were allowed into the hall after interrogations. We noticed that the Nigeria government officials are already weary and prepared to thwart our moves.

They became desperate to push us out, but we refused because we noticed that they want to sneak Buhari out. So when they started assaulting us physically, all our members brought out their Biafra flags and unveiled their Biafra customised clothes.

That is when the Police that were pushing us left us and gave us go-ahead because there is nothing they can do again. Immediately the Biafra flags appeared, everywhere became quiet. So we continued talking and everybody was listening to us. We praised the South African government and Police.

Then after about one hour, thirty minutes, we got information that Jubril has been sneaked out and about to leave with his entourage. So we then became angry because we were blockaded from carrying out our mission. However throughout our stay in the hall, there is this man known as Nigeria High Commissioner who caused the whole trouble. He was busy walking around making calls. He is the one that told the South African Police to shoot at us and disperse us.

So when he noticed that everyone have started leaving, he also wanted to leave and enter his car, but Biafrans rushed towards him and controversies started. That is how we started hearing gun shots everywhere. Our comrade that led us who was arrested had the opportunity to walk away, but he was confident and has a clear conscience and lion heart. So our people surrounded him and asked the South African Police to arrest all of us instead.

There were so many volunteers who wanted to be arrested alongside with him. That is when the shooting started and a lot of people were beaten and injured. Our comrade that was arrested is a hardcore, before we get to the police station, he has already started preaching and convincing everybody there about Biafra, and most of them were already following up with what is going on through the internet and gave us encouragement. The case will be taken to court tomorrow morning(Friday) of which all IPOB members will be there,” he concluded.