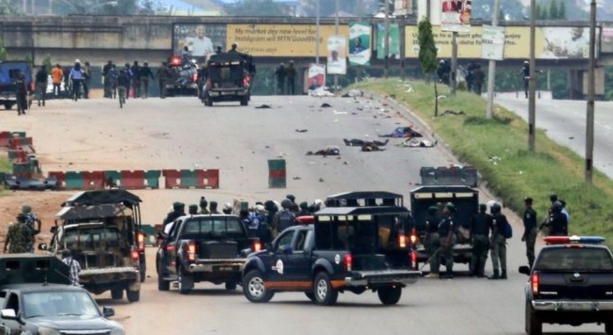 SAHARANEWS – The police command in Enugu State has arrested a 23-year-old suspected notorious armed robber and cultist, Chukwuebuka Ani, who had been operating within Enugu metropolis and 9th Mile areas of the state.

The operatives of the command also recovered a locally-made double barrel pistol from the suspect.

The Command’s Public Relations Officer (PPRO), SP Ebere Amaraizu, in a statement in Enugu on Monday, said that the suspect was arrested on May 3 by the Command’s Anti-Cultism Unit.

ALSO READ:  ‘The Igbo Man Doesn’t Kneel For Anybody Except His Chi’ — Senator Abaribe

Amaraizu noted that Ani, also known as Chi, was arrested through intelligence gathering in the early hours of May 3 at his hideout at Ugbene-1 axis of Abakpa within the outskirt of Enugu metropolis.

SaharaNews gathered that the suspect had before now allegedly involved himself alongside with Chigozie alias SMS and others at large in nefarious activities ranging from cultism and armed robbery in Abakpa, Independence layout and 9th mile areas.

“It was further gathered that the suspect is the Coordinator/Executioner of Ayees Confraternity within Abakpa axis and its environs.

“He was initiated into Ayees cult in 2012 at Alulu Nike by one Ikechukwu also known as 6-months, who is no longer in Nigeria,” he said.

The police spokesman said that the 23-year-old suspect, who also sells marijuana, hails from Umuodimegwu Amaozalla village in Affa community in Udi Local Government Area of the state.

“The state Commissioner of Police, Mr Sulaiman Balarabe, has directed for a full scale investigation into the activities of the suspect.