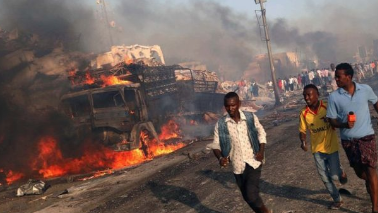 SAHARANEWS – It was moments of tears and pains for the people of Ihiala area of Anambra state as they witnessed an explosion from a gas tanker in the early hours of Friday.

According to reports from an Eyewitnes, SaharaNews learnt that a gas tanker fell at an army checkpoint between Abbot boys secondary school and the Celestial church of God, in the area which resulted in the inferno.

The army checkpoint was burnt to ashes. Some lorries packed along the road and other properties – were also caught up in flames.

Eyewitnesses revealed that the fire occurred for hours as men of the state fire service were nowhere to be found. A pregnant woman is said to have been confirmed died in the inferno due the casualty figure is expected to rise and many suffered several degrees of burnt.

It was also disclosed that the soldiers were around during the fire incident but later left. They were accused by residents of being responsible for the incident due the complexity of their barricades which ‘wouldn’t allow a smooth maneuvers for tankers and big trucks.