BREAKING: Nigeria May Collapse Under Your Watch! – UN… 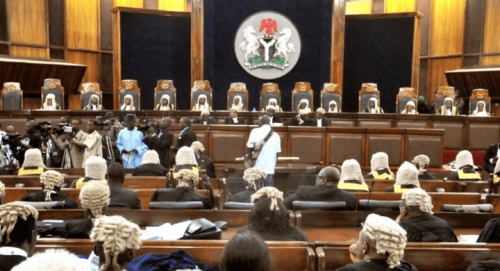 SAHARANEWS – The United States as well as the US Senate will be monitoring the review of the Supreme Court ruling sacking Emeka Ihedioha as governor of Imo State.

The apex court led by Chief Justice of Nigeria, Justice Tanko Muhammad, had on January 14, 2020 through a ruling removed Ihedioha as governor of Imo State and declared Hope Uzodinma, candidate of the All Progressives Congress, winner of the governorship election in the state.

The judgment of the court had been met with stiff criticisms as analysts and experts posited that the court erred in its ruling.

Ihedioha and the Peoples Democratic Party had filed a suit for the review of the judgment.

In view of the review hearing scheduled for February 18, the Nigerian Coalition for Advancement of Democracy has urged the US to monitor the hearing slated for Tuesday.

In their discussion contained in a letter to the Whitehouse and Congressional Leaders, NICAD outlined that there had been an ongoing peaceful demonstration across Nigeria because of the corrupt practices by Nigeria Supreme Court justices.

NICAD held that the decision violates articles 21 of Universal Declaration of Human Rights; and article 25 of International Covenant on Civil and Political Rights as it requested for an urgent intervention from the United States to reverse this miscarriage of justice and prevent further fraudulent judicial decisions in future.

The organisation stated that it had successfully pressured the US Senate to monitor the hearing.

“They agreed to closely monitor the scheduled February 18 hearing on the need to immediately reverse the Supreme Court erroneous judgment in Imo State in the interest of justice and equity,” NICAD said.

The Supreme Court will on Tuesday review the judgment on election petitions in Imo and Zamfara states.

Also, the Supreme Court would on the same day sit on the review of the judgment that nullified the victory of all the party’s candidates at the 2019 general elections held in Zamfara State.

BREAKING: North Will Eventually Destroy Itself If It Doesn’t Change