More Troubles For VP As Buhari Declares That No Constitution… 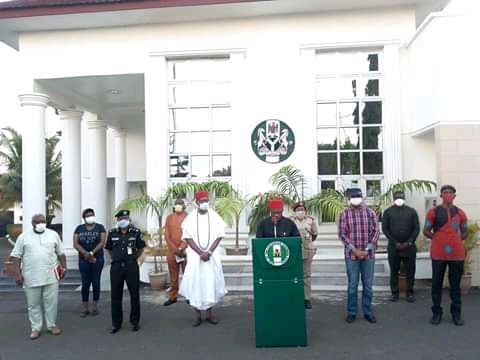 SAHARANEWS – Anambra State Governor,  Willie Obiano has stated that the reason for locking the Onitsha bridgehead with gate is to prevent travellers from coming into Anambra, following the rising number of COVID-19 cases in Anambra State.

According to SaharaNews,Governor Obiano made this known on  Monday during a statewide COVID-19 broadcast at the Governor’s Lodge, Amawbia.

Governor Obiano urged the non-essential service providers who are trying to come into Anambra State to remain where they are till the presidential lockdown in the country is over.

Governor Obiano stated that if people remain where they are, the virus will not spread fast.

Governor Obiano explained that the only COVID-19 death recorded in the state was the case of a sixty three year old man who didn’t report ill but checked himself into a private hospital, saying that by the time his samples were taken and brought back, he already died.

Governor Obiano announced the set up of COVID-19 task force at the ward levels in the state, headed by the ward councillors. He warned that people who hide their medical conditions, run the risk of dying as a result of the virus.

While stating that the state COVID-19 task force headed by himself, will keep working to curb the spread of the virus in the state, he urged the hospitals in the state to create an isolation place where they can keep anyone whose test had been taken as a way of protecting them.

As at the time of this report, Anambra State has recorded a total of nine cases of COVID-19. Four of the cases are currently in the Protective Care Center. According to the governor, one of the cases was accompanying a corpse from Lagos to Imo State, after which his sample was captured for testing in Anambra. He has since returned to Lagos, and his whereabouts has been communicated to the appropriate authorities. Three of the cases have been discharged and one of the cases has passed on.

ALSO READ:  Buhari’s FG Is Aiding Fulani Islamic Terrorist Groups To Carrying Out Unannounced Jihad In Nigeria And We Are Doing Nothing To Stop Them - Prof Akintoye, Yoruba World Congress Expresses Worries