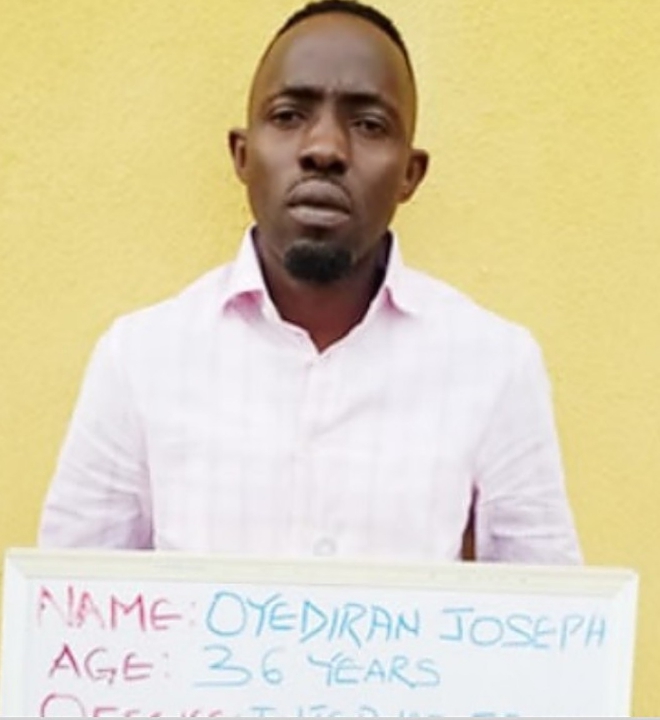 SAHARANEWS – The Economic and Financial Crimes Commission (EFCC) on Friday paraded one of the suspected internet fraudsters most wanted by the United States Federal Bureau of Investigation (FBI) in Ilorin, the Kwara State capital.

The EFCC said the 36-years-old suspect, Oyediran Joseph, was arrested in Ilorin, Ilorin Zonal Head of the commission, Sharu Isyaku told reporters, adding that “the 36 years old suspect had benefited about N60 million from the loot via Western Union transfer.”

The FBI had reportedly arrested no fewer than 78 Nigerians in the USA involved in internet fraud and cybercrime related offences amounting to millions of US dollars.

Mr Isyaku said “just in the last three weeks, the US authority had written to us for assistance in tracking and possible arrest and prosecution of two most wanted FBI suspects in Nigeria. The commission acceded to their request.

“The commission has been supportive of the activities of the FBI and every other foreign counterpart whose responsibility is similar or analogous to ours.”

EFCC zonal head revealed that the zone had traced four properties linked to some cybercrime suspects in choice areas to Ado-Ekiti, Ekiti State.

He said the properties include supermarket and plaza put in the region of between N800 million and one billion naira.

Said he: “Within seven months of our operation, the Ilorin zonal office has independently arrested over 58 suspected internet fraudsters, secured conviction of 25 and got forfeiture of their exotic cars and money running into millions of Naira to the Federal Government.

“We all know it is image that sells a product and nothing else. Our strength as a nation is dependent on the vibrancy of our economy, which is a common denominator binding us together. Businesses worldwide are being conducted through the medium of cyber. This underscores the need for all of us to come together in fighting the scourge of internet fraud and cybercrime with a view to making the cyberspace well-fortified so that foreign investors can come in and invest to further boost our economy.”