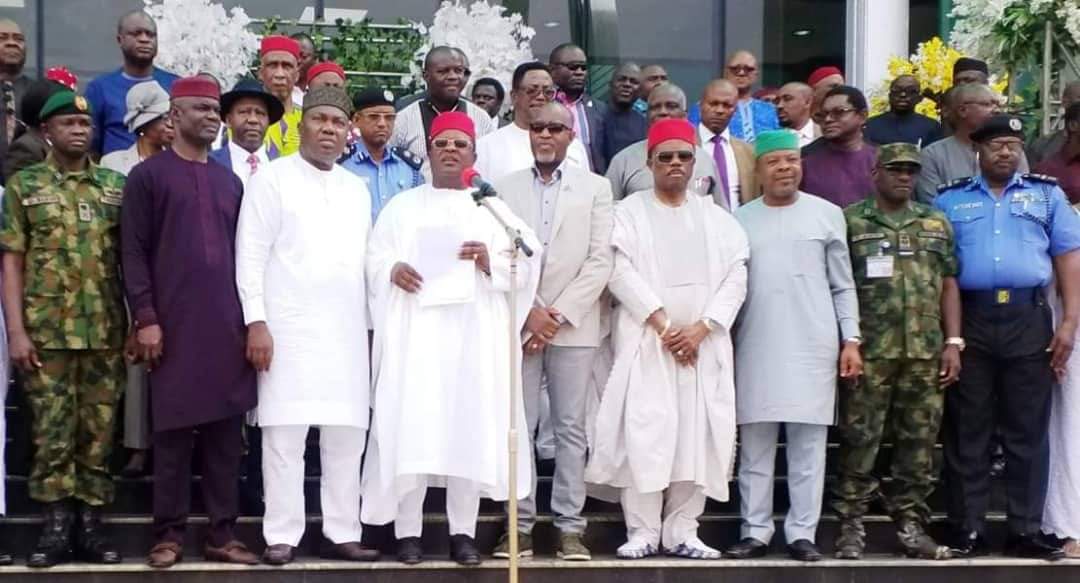 SAHARANEWS – Dear SE governors (minus Ihedioha): With all due respects your Excellencies, before anybody believes your recent contrite assertions that you were not briefed or otherwise complicit in the 2017 Python Dance military operations that claimed the precious lives of your innocent citizens, you need to do more, including but not limited to the following recommendations:

You must, as you did in September 2017, gather together and de-proscribe IPOB; and then render a heart-felt, sincere public apology for hurriedly resorting to a course of action that was wrong (and dangerous) in all of its ramifications.

You must go on record by writing to the National Assembly, informing it that it is now your reconsidered position that the President had violated the Constitution by launching combat military operations in your States and against your people without first declaring a ‘state of emergency’ as required by Section 305 of the Constitution, thereby committing a “gross misconduct” that should trigger the fell consequences of Section 143(2)(b) of the Constitution. Hint: If Python Dance was constitutional, you wouldn’t be spiritedly disclaiming it, as you’re now doing. You would, instead, be condoning or defending it or even calling for more of it.

You must instruct your Attorneys-General to join in the still-pending suit filed by Alaigbo Development Foundation (ADF), seeking a declaration that Python Dance was unconditional. It’s easy to do, as all needs to be done is for your AGs to file a joinder of some sort or even a ‘friend of the court brief’. If you need more information or a pathway on this, please don’t hesitate to contact me. I’m one of the Lead Counsels of record in that suit.

ALSO READ:  The idea of Biafra is madness and we don't want it — Umahi

You must insist on a Judicial Inquiry on the atrocities committed during the said Python Dance, to legally establish the actual number of fatalities, injuries, displacements and other collateral damages, with a view to taking penal actions against all culprits, whether in command and control or line and staff. A federal public apology and adequate compensation must also be in purview. If you meet a brick wall (which is very likely), then you must – in unison – bring international diplomatic pressure to bear on the matter. Recall that Northern governors had – in relation to Boko Haram – walked the same path against former President Jonathan. So, you got a precedent, even as unsavory as it is.

You must demand an apology from the federal government or its armed forces for desecrating the palace of a ranking traditional ruler in Igbo land, which – in and of itself – is tantamount to desecration of all Igbo, their traditional institutions and sense of worth.

You must demand immediate and unconditional delisting of IPOB as a terrorist group and discontinuance of all prosecutions of its members and recognition of their inalienable right to hold a political opinion (popular or unpopular), to freely express themselves and to peaceably assemble for any lawful purpose, including agitating for the right to self determination and to a referendum. If in doubt, please go and read Articles 1 and 20 of the African Charter on Human and Peoples Rights (Ratification and Enforcement) Act, CAP A9, Laws of Federation of Nigeria, 2004. It is a Nigerian law, enacted by Nigeria since 1983 but which is sadly confused for (and thus derided) by Nigerian authorities as a ‘mere’ African continental law that should not be applicable in Nigeria.

You must ask the federal government to, without any further delay, obey and implement the letters and spirit of a certain landmark decision recently issued by an international tribunal on a case that bordered directly on Python Dance, declaration of IPOB as a terrorist organisation, prosecution/killings of its members and most remarkably – their right to self determination. You can get details of said international decision from the Attorney-General of the Federation, or you contact me in confidence for the details. I’m the counsel of record in the case.

Finally, you must go back to the constructive dialogue you were already having with Mazi Nnamdi Kanu back in early September 2017 but which, without cause, you unilaterally and summarily ended; and then made it worse by resorting to that infamous proscription that ultimately stigmatized your people and watered the ground for the myriad federal unconstitutional actions that ensued, including particularly the declaration that millions of your unarmed citizens are terrorists.

I assure you that once you begin to earnestly take these steps, Ndigbo will reconsider. They will begin to see you as men possessing the requisite courage and sincerity to be accepted as their true leaders. Only then will Ndigbo come anywhere close to believing that you had nothing to do with that damned Python Dance and all its horrendous aftermaths. Only then will there be any hope of having some closure, some comfort in the underserving deaths, sorrow and destructions that were wrought.